You can also use definition lists, which are stored in files on your hard drive. Let's say you have a list of search engine URLs that you want to allow:

Then the ACL for this file will look like this:

The quotes are needed here to tell Squid to look for definitions in this file.

In addition to the already mentioned types src, port, dstdomain, proxy_auth, there are dozens of other types, for example:

By themselves, acl elements do not change anything in the behavior of the proxy server, they are only lists for further use with Access List Rules. As the documentation quirky says, these tests themselves do nothing, for example, the word “Sunday” corresponds to the day of the week, but does not indicate what day of the week you are reading it. 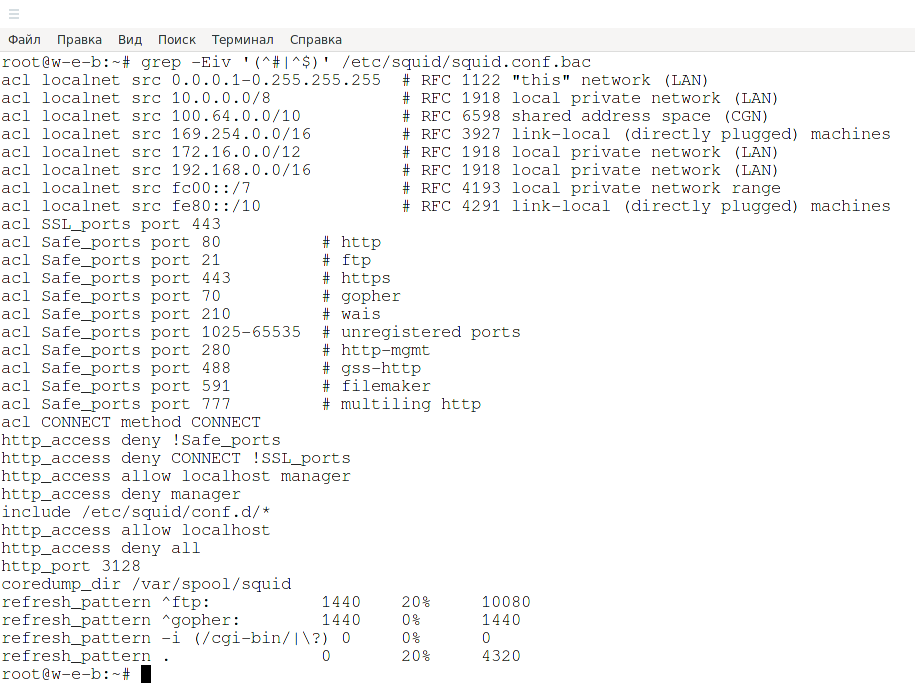 If you only wrote down ACLs, then nothing is actually blocked – these are just definitions. ACLs can be used in various places in your squid.conf. The most useful function they can be paired with is the http_access instruction. It works in a similar way to how a firewall handles rules. For every request that Squid receives, it will look through all http_access statements in order until it finds a matching string. It then either accepts or rejects the request depending on your settings. The rest of the rules following the triggered one are ignored.

The general syntax for http_access is as follows:

You often need to combine ACLs. Let's say you want to allow only back office access to google.com. To do this, you need to combine two ACLs using a logical AND. It would look like this:

If you want to use OR and say that either access from back office or access to google.com is allowed, the rule would look like this:

To summarize: for AND, you need to place conditions on one line. OR requires separate lines.

The following set of rules is wrong, it will never work:

Besides http_access, there are a couple of dozen other types, for example:

If there are no lines with “http_access” in the entire configuration file, the request is rejected by default.

If none of the “http_access” lines match, the default is the opposite of the last line in the list. If the last line was deny, the default is allow. Conversely, if the last line is allow, deny will be applied by default. Tricky, right? For these reasons, it is recommended that you have a “deny all” entry at the end of your access lists to avoid possible confusion. That is, after all the rules, just add the line:

So, back to our combination of rules “blocking sites + authorization on a proxy server”, why is the following set incorrect?

The fact is that first the rule that requires authorization on the server is triggered, namely “http_access allow auth_users”. All subsequent http_access directives are simply skipped, so sites are not blocked.

The site-blocking directive moved up is the first to fire. Moreover, this happens even before authorization on the proxy.

In this case, the rule is triggered if two conditions are met: authentication and the site is not included in the blocked list. An exclamation point means logical NOT. The last option is the best, it is logically more understandable and it performs any actions (blocking the site) only after the user has entered the proxy server login and password.

View more posts from this author
« How to configure Squid to use IPv4
Error “Authentication helper program /usr/lib64/squid/basic_ncsa_auth: (2) No such file or directory” (SOLVED) »