Linux Mint 20.2 is uploaded to the mirrors and is available for download:

The biggest piece of news this month is the upcoming release of Linux Mint 20.2 “Uma”.

After the stable release is officially unveiled, the upgrade path will open from Linux Mint 20.1 and Linux Mint 20, and all new packages will be ported to LMDE 4. Some of the improvements and fixes made in Linux Mint 20.2 will also be carried over to earlier versions, in releases 20. x.

A new XApp was implemented to add the ability to bulk rename files in Cinnamon and MATE. The new application is called Bulky and it will ship in Linux Mint 20.2. 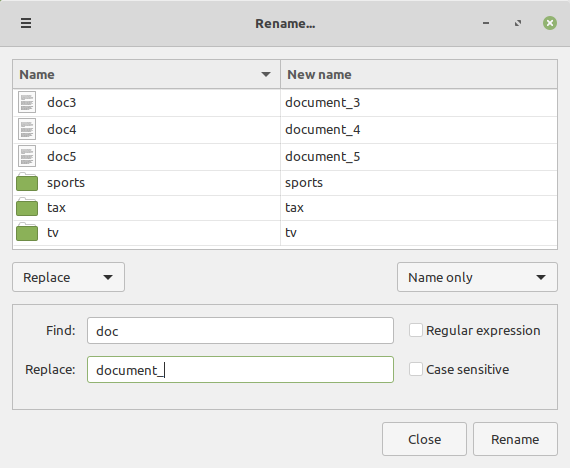 In Xfce, Thunar already comes with its own embedded bulk renamer, so Bulky won’t be needed there.

Nemo will feature content search. Until now you could only search for files. In Nemo 5.0 you’ll be able to combine file search and content search, i.e. files which are named a certain way and/or which contain particular words. 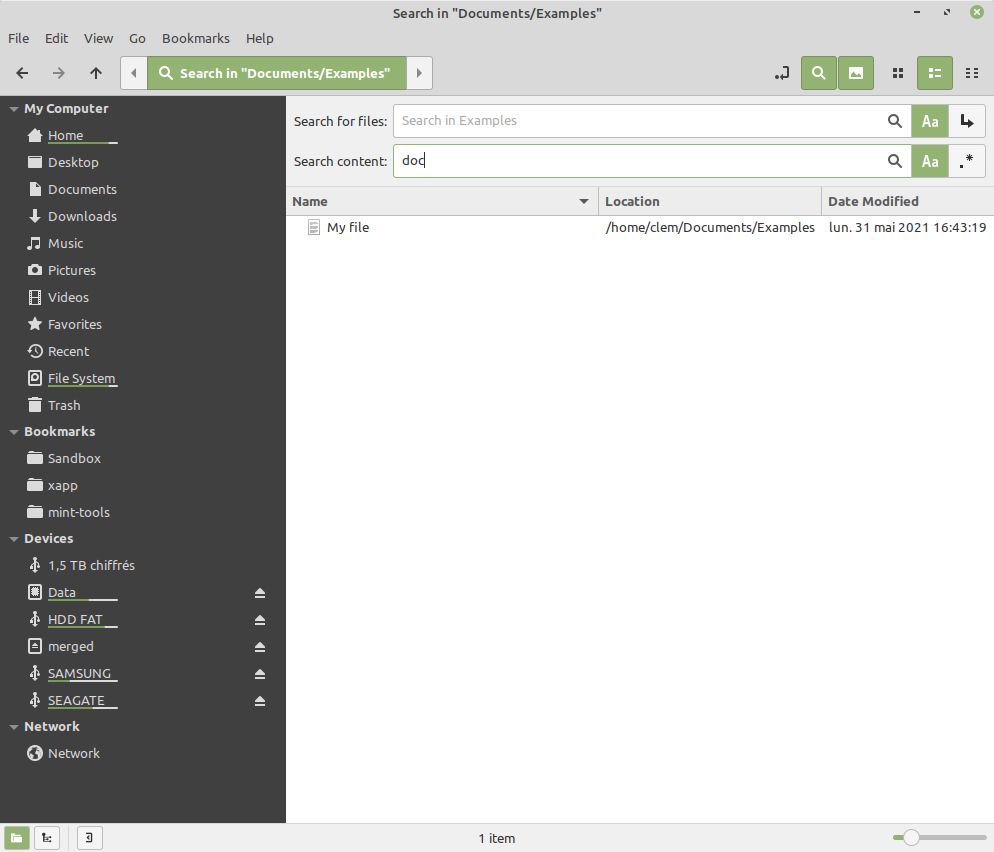 Regular expressions and recursive folder searches will be supported.

Nvidia-prime-applet 1.2.7 was backported recently. It contains a fix for a regression in ubuntu-drivers-common which made the applet disappear.

It also contains support for computers with AMD/NVIDIA hybrids (i.e. systems with an integrated AMD GPU and a discrete NVIDIA GPU).

A new optional compression setting will also be available. Once enabled on both machines, compression can make transfers up to 3 times faster.

Cinnamon 5 will provide management tools to check for and perform updates of Cinnamon spices. As a reminder, a Cinnamon “spice” is an add-on to the desktop environment which is not part of the core desktop. There are 4 types of spices:

Until now to see updates and to apply them you had to go in the system settings or you had to use a 3rd party applet developed by Claudiux called “Spices Update“.

Cinnamon 5 will ship with a command line tool called cinnamon-spice-updater which can list available updates and/or apply them. To make it easy for distributions to integrate Cinnamon spice updates within their Update Manager a Python 3 module will also be provided. 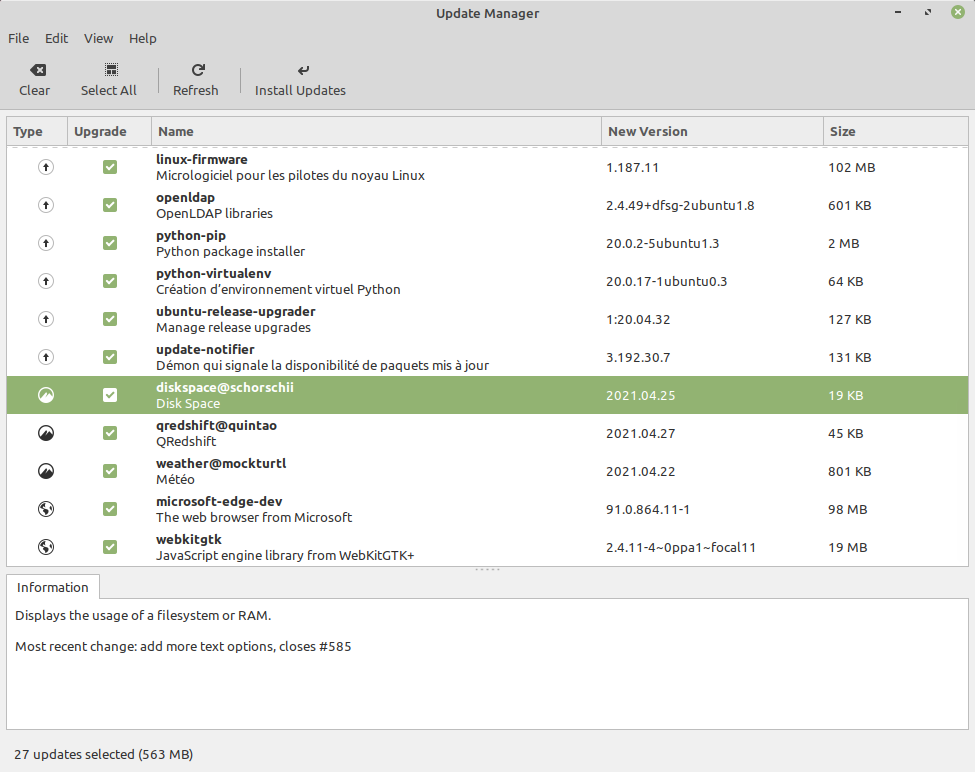 Although from a technical point of view they are radically different than APT updates, from a user point of view they will be presented in a very similar manner. You’ll be able to see the same kind of information for them, and to enjoy the same features as you did already, such as the ability to blacklist a particular spice or a version of a spice for instance. 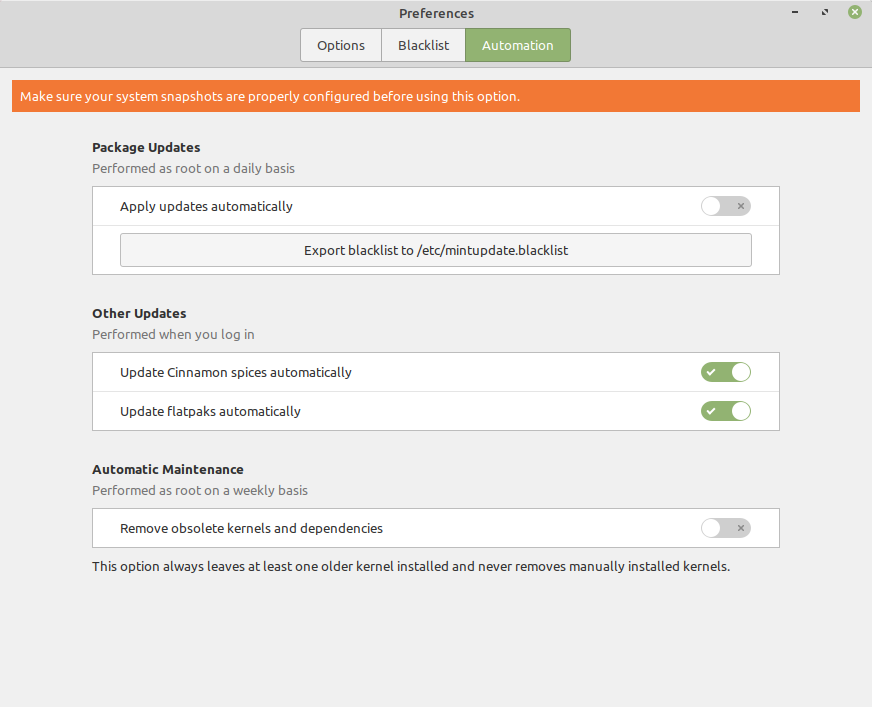 You’ll also be able to automate spice updates. In automatic mode spices will be upgraded shortly after you log in, the DE will then get refreshed (this is barely visible, Cinnamon restarts itself seamlessly, you just see the mouse cursor get reset on the screen when this happens) and a notification will popup to show you what was upgraded.

The Update Manager will also handle the automation of Flatpak updates. This was previously located in “Startup Applications”.

If you are running one of these releases your operating system will continue to work but you will no longer receive security updates from the repositories. We recommend you backup your data and perform a fresh installation of Linux Mint 20.1, which is supported until 2025.

Alternatively, you can upgrade to Linux Mint 19.3 which is supported until 2023.