GUI program to view and delete metadata in Linux

Metadata is additional information embedded in a file, for a photo, metadata is GPS coordinates, information about the camera, shooting settings, etc., for office documents, metadata is the author's name, the time the document was edited, the name of the organization, the editor program, etc. As it is said, metadata is information that describes other information.

Many file formats have embedded metadata. Sometimes the metadata can be viewed and even deleted using the usual editor tools (for example, in the Word editor and other office programs from Microsoft Office), but in any case, you need to know where and how to view or delete the metadata. The usual is a non-trivial task.

You do not need to remove metadata for files that you do not share with anyone, but use it individually. But you may want to delete, for example, the editing time of the document when sending it to the boss, or GPS coordinates for photos.

Removing metadata can be related to privacy and anonymity. If these questions do not bother you, then, again, you do not need to think about removing the metadata.

If you are not sure, for example, due to the fact that you simply do not know what kind of data is contained in the metadata, then this instruction will show you how to view and, if desired, remove metadata from any file.

A GUI metadata tool for Linux

There are quite a few powerful and high-quality programs for working with metadata, including for viewing and deleting them, in Linux, for example:

The first four are generic (support a wide variety of file formats) and powerful, but have a command line interface. Geotag has a graphical interface, but only supports some image formats and a limited set of metadata.

GUI program for viewing and deleting metadata in Linux

Installation on Arch Linux, Manjaro, BlackArch and their derivatives:

Then run the command:

Once installed, you can find the program in the menu called “Metadata Cleaner”.

Or run it on the command line:

To check and clear the metadata, click the “Add files” button in the upper left corner.

Next to the file name, in a red background, you will see the number of metadata found. 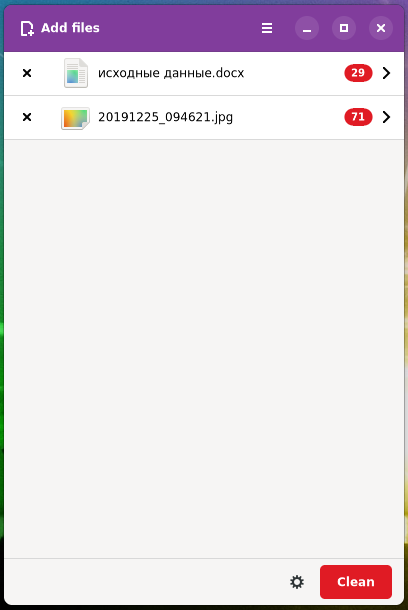 Click the arrow next to the file name to view the found metadata. 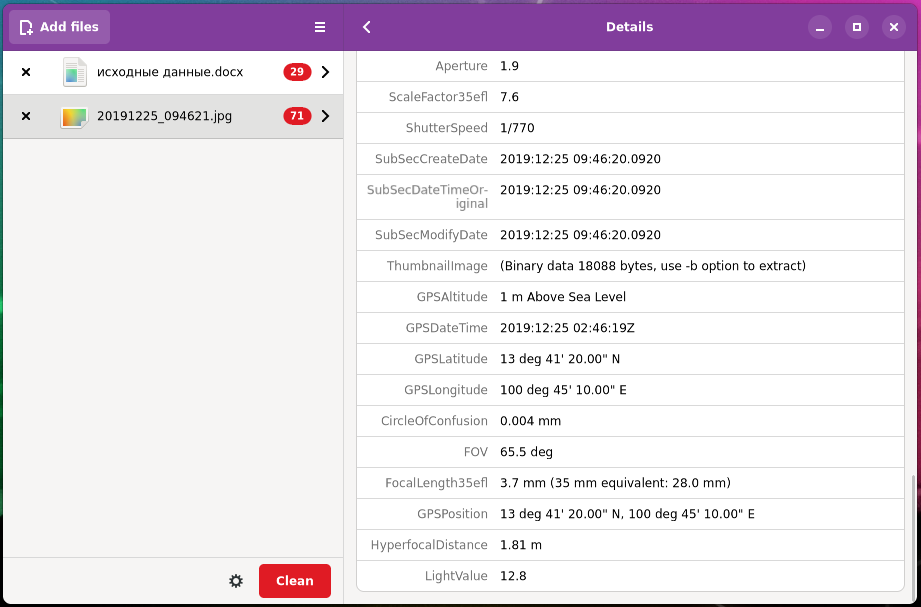 Please note that unlike mat2, Metadata Cleaner overwrites original files and does not leave backups. For this reason, the program displays a warning that reminds you to make a backup. If you want to continue, then click the “Clean” button again.

Please note that all files in the list are cleared at once! 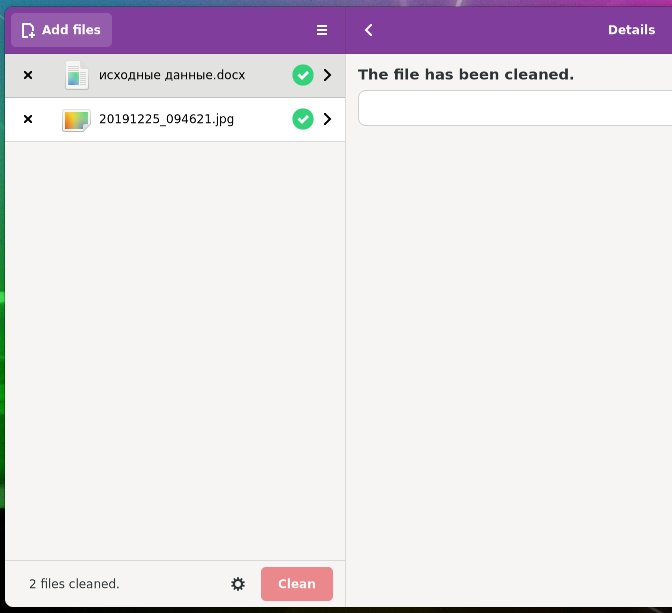