Excessive load on the disk can be caused by such a reason as a virus infection or incorrect program settings. In any case, you need to start by identifying the process (program) that most reads and writes to disk.

The top program allows you to see which processes are consuming the most CPU time and RAM, but does not say anything about disk usage, reads and writes to disk.

See also: How to use the top command to monitor Linux processes

The iotop program shows the speed of reading and writing to the disk, as well as the percentage of paging file used by each process.

To install iotop on Debian, Linux Mint, Kali Linux, Ubuntu and their derivatives, run the command:

To install iotop on Arch Linux, BlackArch, Manjaro and their derivatives, run the command: 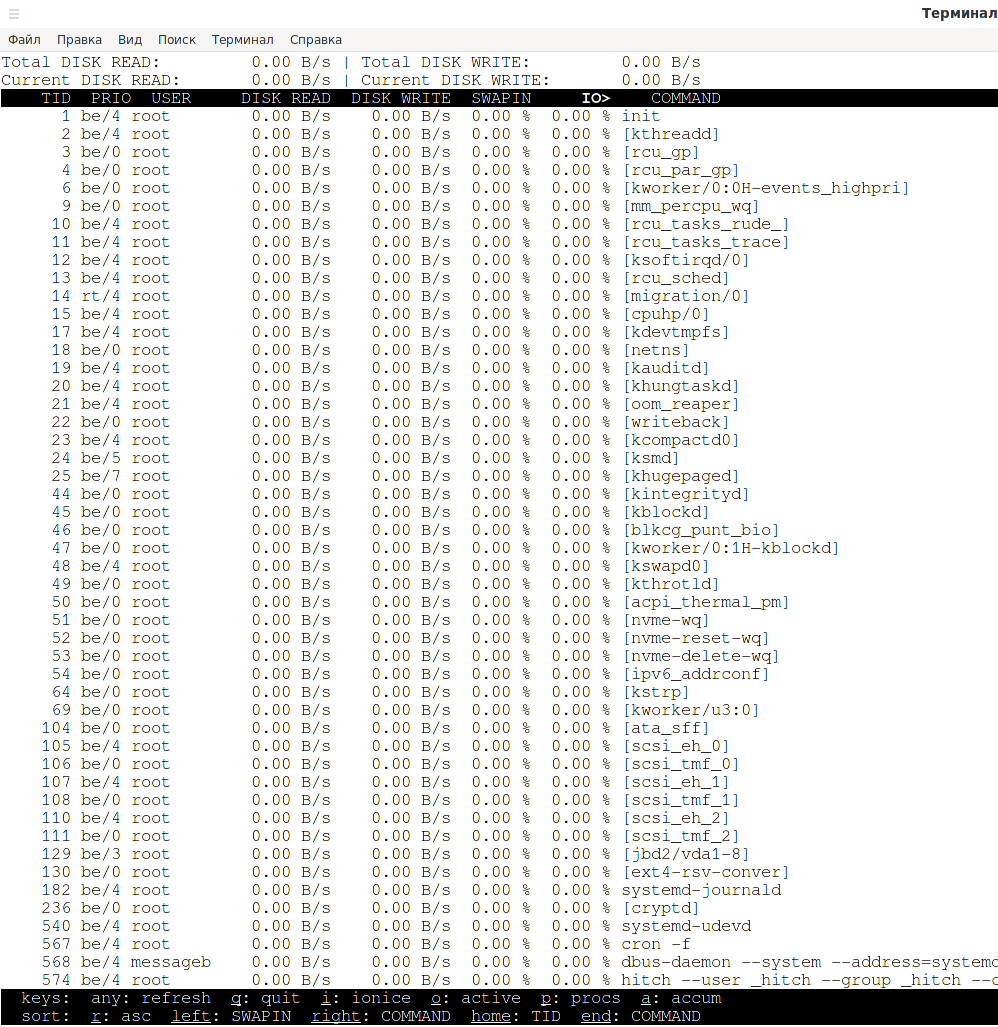 Using the cursor right (→) and left (←) keys, you can switch between columns, simultaneously choosing which of them will be sorted by. 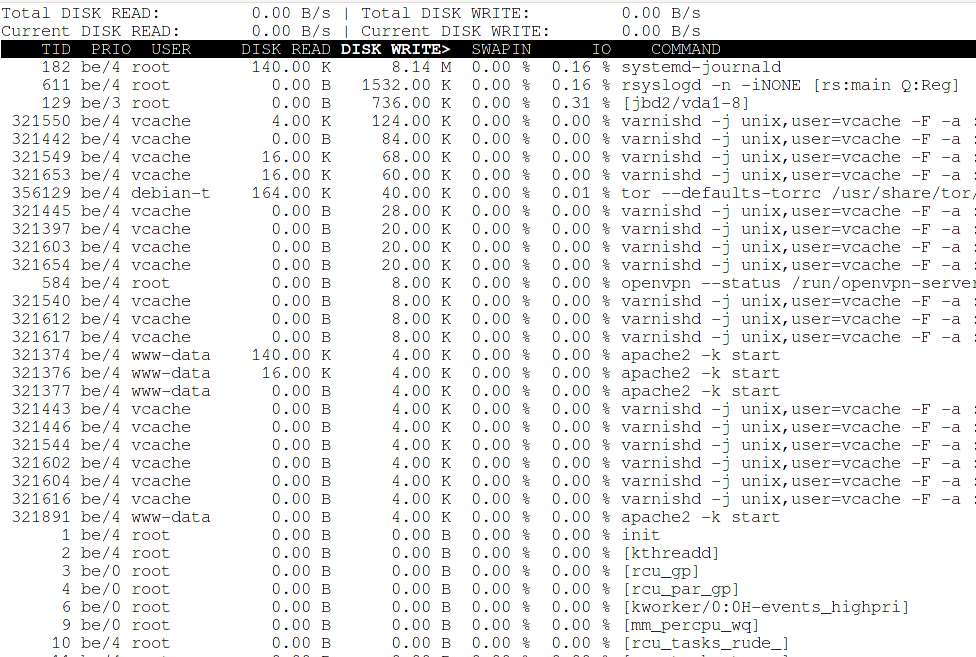 With the buttons “Home” and “End” you can switch between the outermost columns.

Pressing any key will refresh the window.

By pressing the “o” key, you will switch to showing only active processes, that is, only processes that write and read data from persistent storage. You can get the same result by running the program with the -o option:

Pressing the “o” key again will return the display of all processes.

The “p” button toggles between displaying processes and streams.

By default, read and write speeds are shown, using the “a” button you can switch to displaying the total amount of written and read data.

iotop has several options that allow you to control the behavior of the program, for example, the following command will work in batch mode (-b), showing the total amount of written and read data (-a) only for active processes (-o), to the output data will be appended timestamp (-t), only systemd-journald information will be filtered from all processes (grep 'systemd-journald'):

The sysstat package contains two utilities at once with which you can collect statistics on disk usage by processes:

To install pidstat on Debian, Linux Mint, Kali Linux, Ubuntu and their derivatives, run the command:

To install pidstat on Arch Linux, BlackArch, Manjaro and their derivatives, run the command:

The next command will display the accumulated statistics for every 20 seconds, only active processes will be shown (that have made read and write operations to the disk during the specified interval), and the full command that started the process will also be shown. For more complete statistics, run the program with elevated privileges:

Each row will have the following columns:

The iostat utility is also included in the sysstat package. As you might guess from the name of the program, it generates reports on I/O statistics for devices and partitions. Its peculiarity is that it shows generalized statistics for the entire system, as well as for individual disks, without breaking it down into processes. The iostat program can come in handy when you need to answer the question: “Which of the persistent media is most loaded?”

Running the program without options

will display two blocks of information:

The section with device usage statistics contains the following columns:

The report is output for the entire system from the moment it was booted.

Since data is output in kilobytes by default, and modern volumes of information written to disk are usually multiples of a gigabyte, the numbers are difficult to read. To display numbers in human-readable units, use the -h option:

The -h option is the equivalent of specifying two options --human and --pretty at once, so if you are not completely satisfied with the appearance of the outputted report, then try using these options separately.

To display as much information as possible, use the -x option:

If you only want information about devices, then use the -d option:

You can run the command by specifying the interval time (in seconds) and the counter (number of reports) – in this case, the program will display information at the specified interval:

To find problems, you can use the following command, which will continuously print information:

With iostat, you can monitor the read and write speed of the entire device, as well as identify discarded blocks.