Chiang Khan is a province in the north of Thailand

Chiang Khan is a province in northern Thailand, on the border with Laos. Here, the climate (colder), culture (the influence of Laos and the eastern regions of Thailand called Isan), economic development (poorer, many wooden houses instead of skyscrapers) differ here from the usual Thailand in Pattaya.

My trip to Chiang Khan turned out to be memorable, quite spontaneous and very budget. If you want to plunge into the provincial life of Thailand (but not so much as a village), then you should like this place. If you are a foodie, or love a beach holiday, or you need spectacular urban places, then this place is not quite for you.

We got to Chiang Khan from Bangkok. The trip there lasts about 8 hours, we departed at 20-21 o’clock, and arrived around 5 a.m. Big buses (not minivans) go there, some of these buses are even double-decker. The bus has very comfortable seats, there is a toilet, each chair has USB sockets for charging phones, they give out a blanket, they distribute water, cookies, and cake. The ticket price is about 600 baht. We set off from the Mochit bus station. The Mochit bus terminal currently consists of an old and a new terminal. At the old terminal there are mostly big buses, from this place we went to Chiang Khan. At the new terminal there are mainly minivans, from there you can leave, for example, to Hua Hin.

Chiang Khan on the map: go.

On the map are the places we visited. This is a small province. There is Laos in the north: 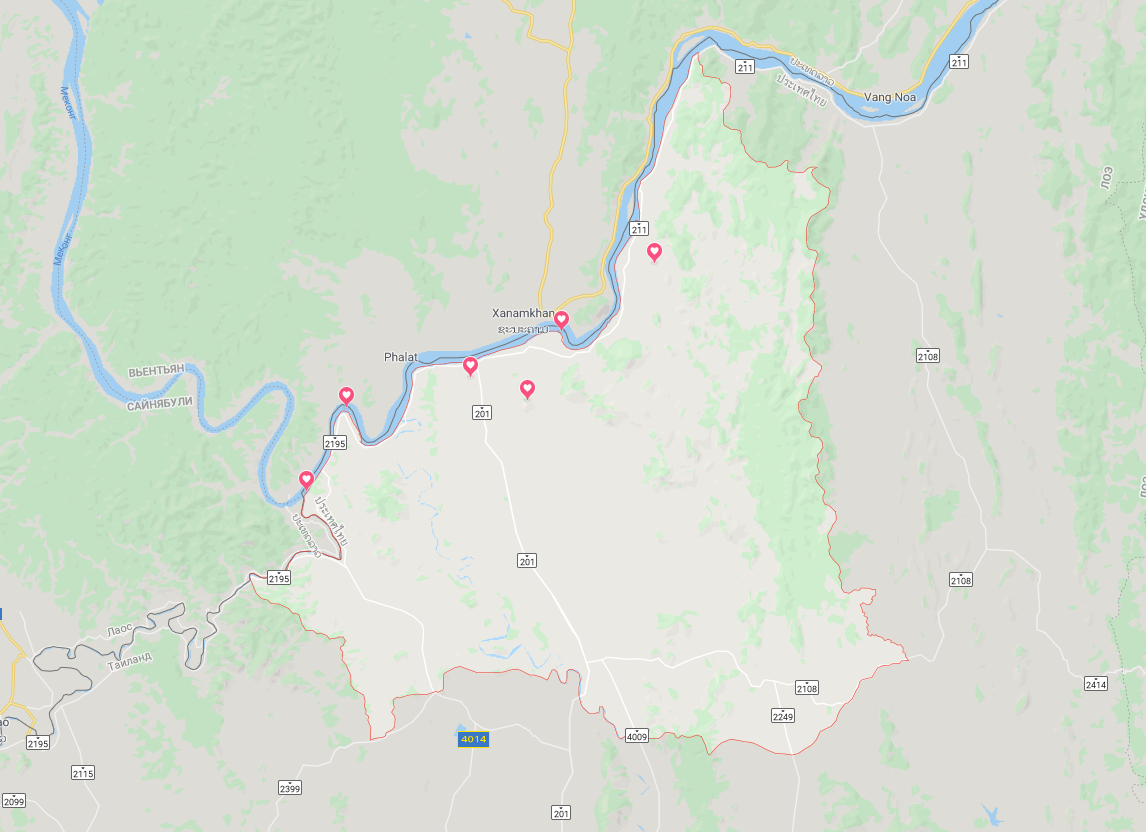 The peculiarity of this place is that there are not many hotels there, but the so-called homestay (that is, residence in a private house) is common. In fact, there homestay is almost no different from hotels. Typical homestay is a two-story wooden building in which there are a few (about 10) rooms. Rooms have a toilet room. Difference from the hotel:

Simply put, homestay is such a small hotel. Air conditioning is available not everywhere, but in the north of Thailand it is not critical – depending on the season of year, it can be quite cold at night.

Our room in homestay – the room itself is small, but everything is clean, there is air conditioning and a window, a good shower room, there is a balcony with armchairs in the common place: 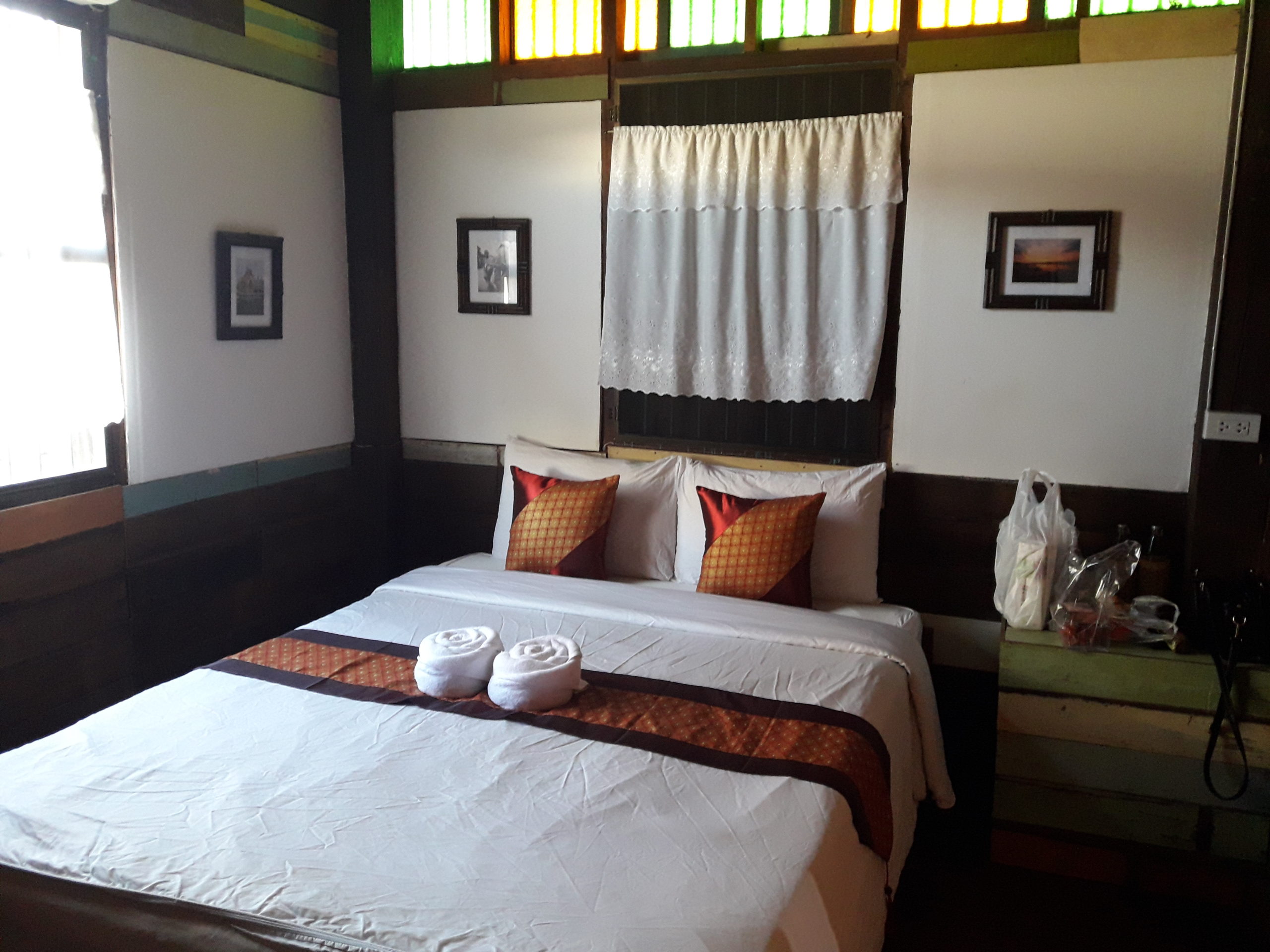 The bus dropped us off before 5 am. It was cold. As I mentioned, the homestay opens only after 6, and until that time we had nowhere to even drop our backpacks. We decided to find our homestay, it turned out that from the bus stop to it no more than 10 minutes walk. The river was even closer – in order not to stand, we decided to walk along the river. Along the shore, lanterns are lit and deserted at this time. There is nothing much to watch at night and we found 7-11 to buy hot coffee and hot noddles. We warmed up a bit and went back – to our homestay, where after 6 in the morning we threw our backpacks. 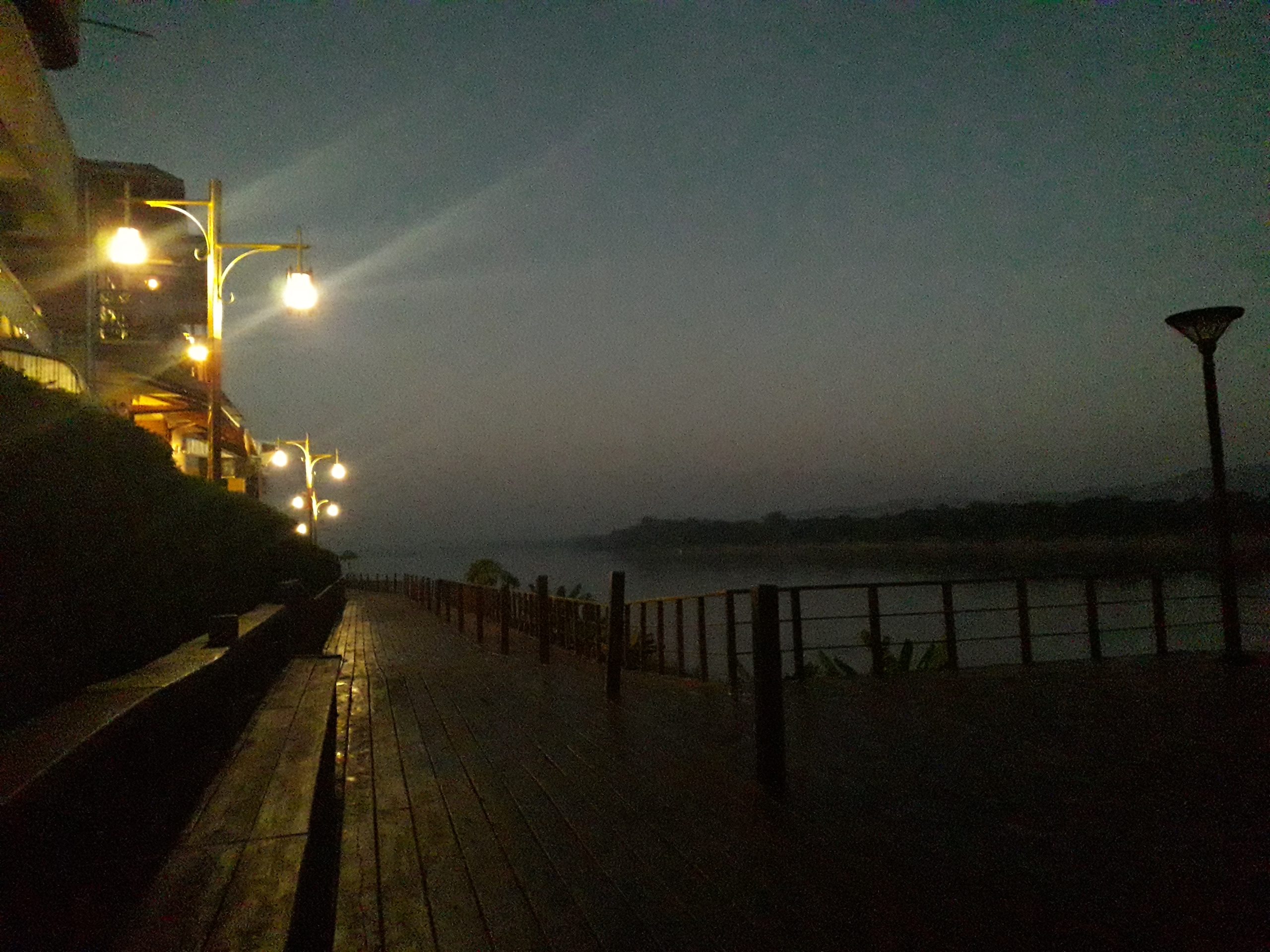 Early morning by the river is romantic! 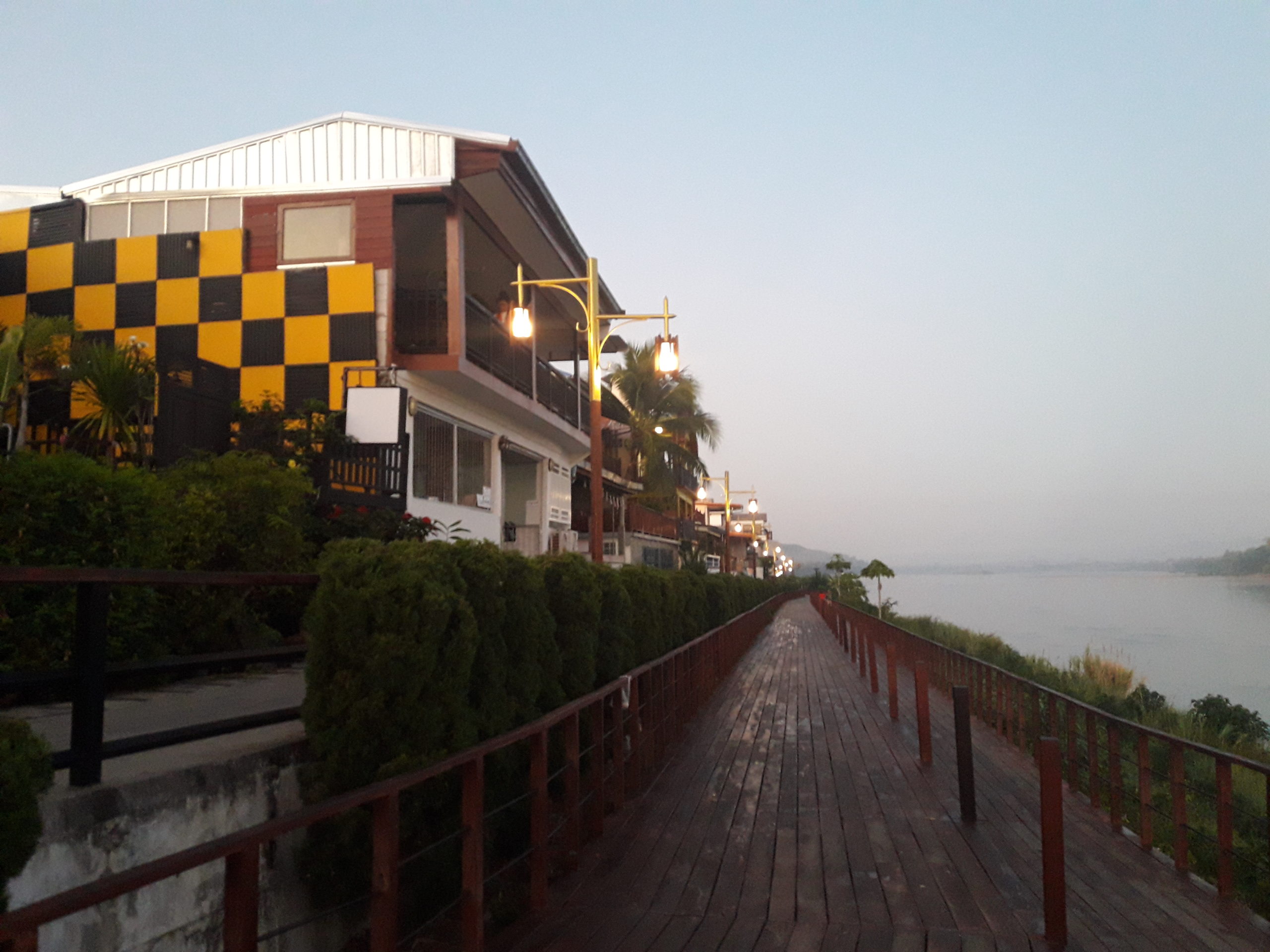 Right next to the hotel, a motorcycle rental salon has already begun to work. We rented a motorbike for two days. Amazingly, they didn’t take any deposit from me, nor did they look at the documents. The motorcycle was with a full tank – they said to return it with a full tank as well. By the way, when renting a motorcycle, for example, in Pattaya, they took 1,000 baht of deposit, they copied my passport and driver’s license, the gas tank was so empty that I wasn’t sure I could get to the gas station or have to push my motorcycle there…

On a motorcycle, before 7 in the morning, we went to Phu Thok. This is a mountain on which the view from the observation deck opens 360 degrees.

Although at that time it was not so cold as at night, but riding a motorcycle was cold anyway. I tried not to drive faster than 40 km/h, but it was still cold. The girlfriend trembled all the way from the cold and made an appropriate sound, something closest to what is called ‘teeth are chattering from the cold’. Although I myself was also cold, nevertheless it was so funny)))))) The first time I saw a Thai girl freezing. 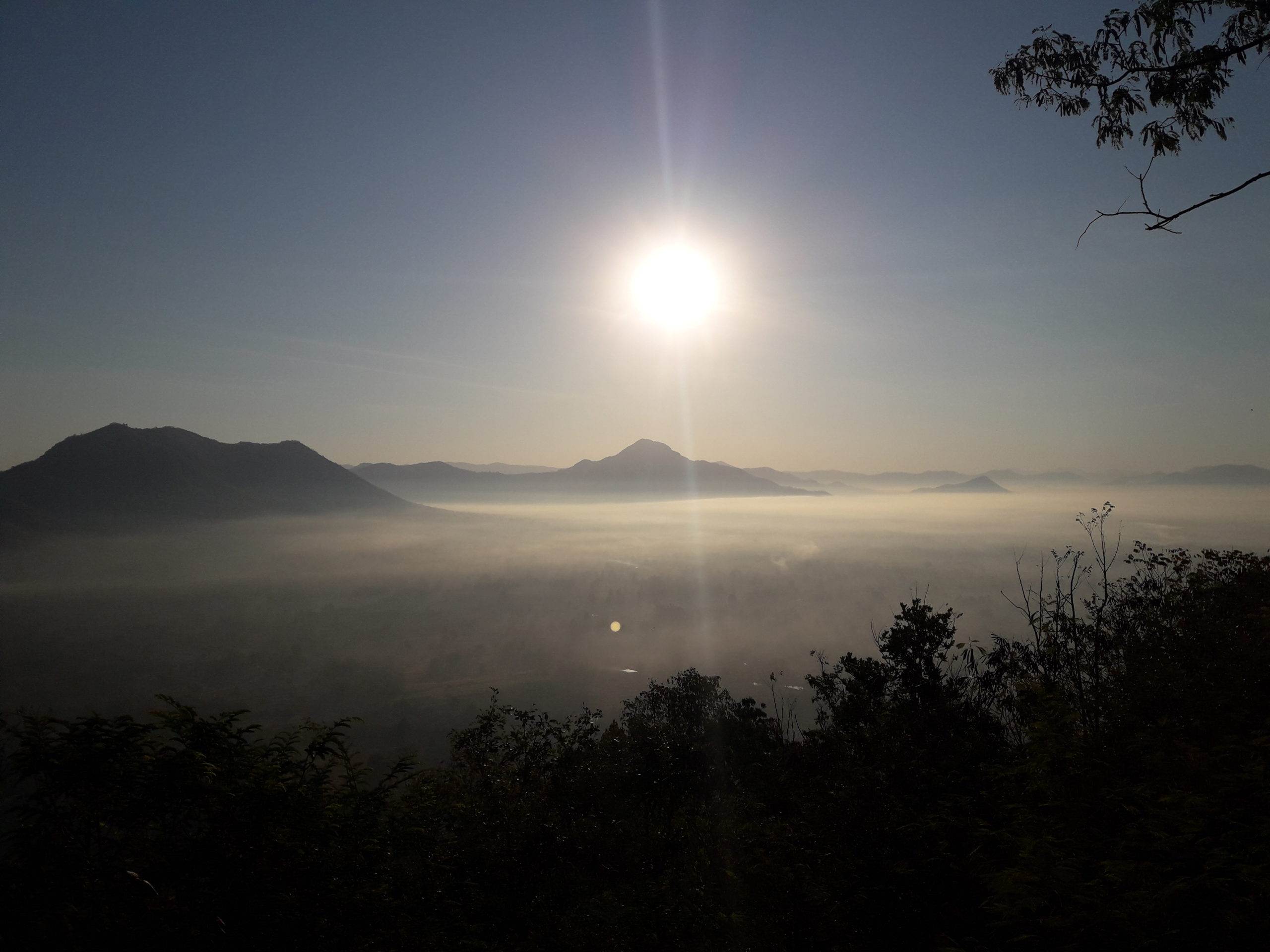 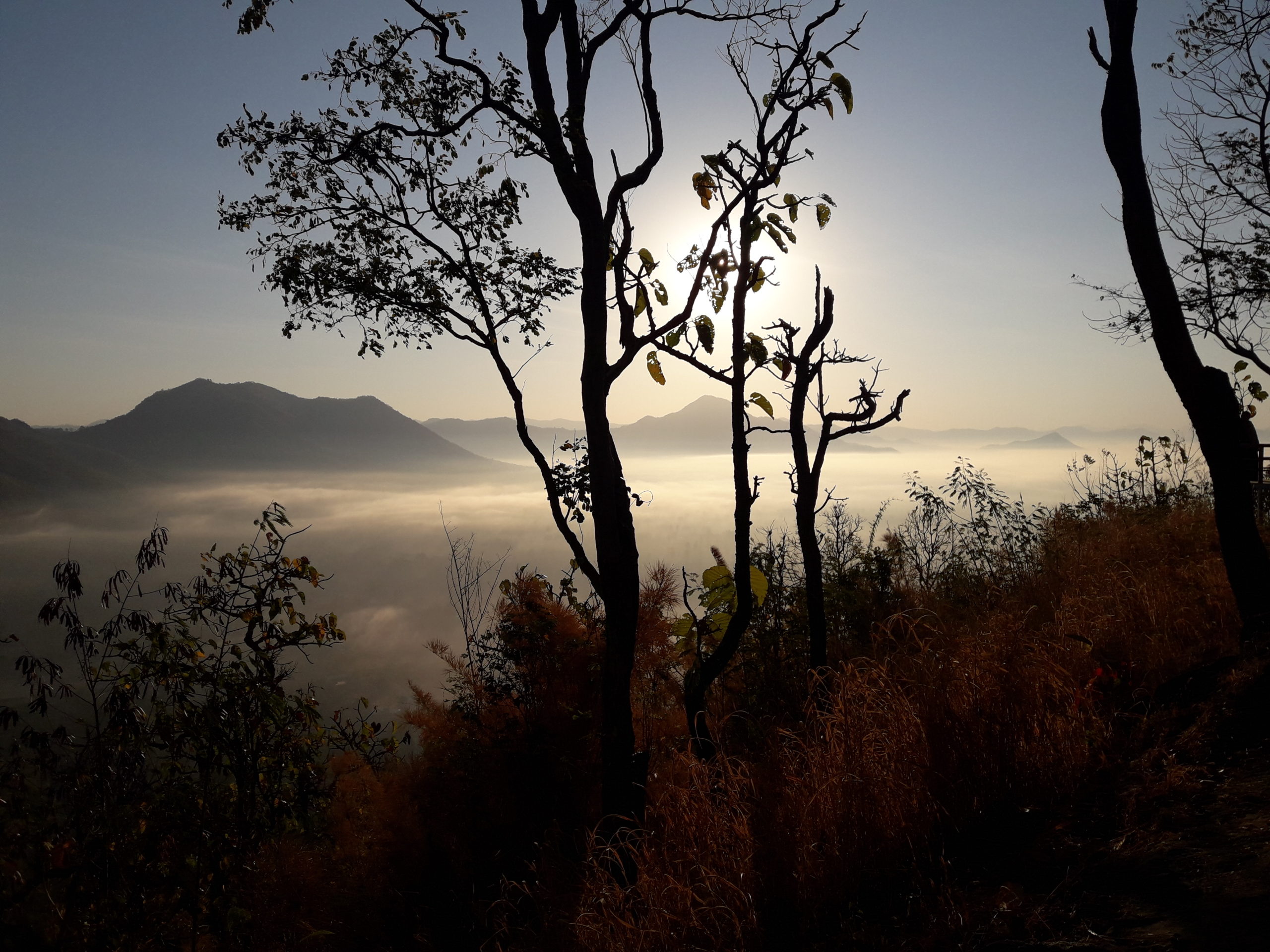 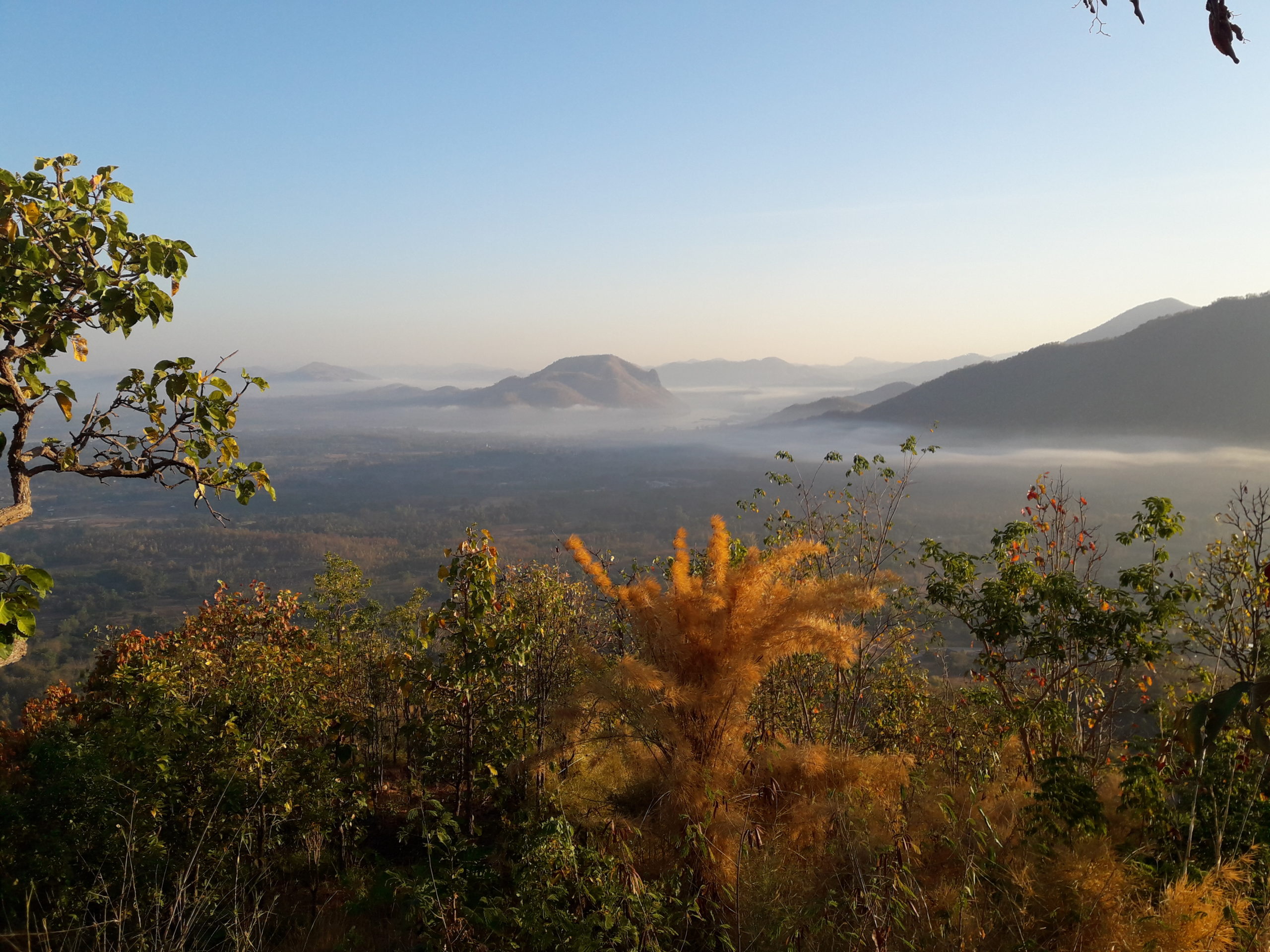 The trip to Phu Thok took a little time and it was still early to return to the hotel for check-in, we decided to see the temples. While trying to get to one of the temples, we were on the road to the field, then the road ended… We turned around and decided to go to another place.

We headed towards Phraphut Nawamin. The road through the northern Thai province turned out to be very pleasant: there is little transport, interesting landscapes, in one place we stopped on the bank of the river to relax and to warm ourselves.

Phraphut Nawamin is a picturesque place: a mountain overlooking the river. An impressive observation platform is being built here, which will be called Skywalk, this is how the project looks: 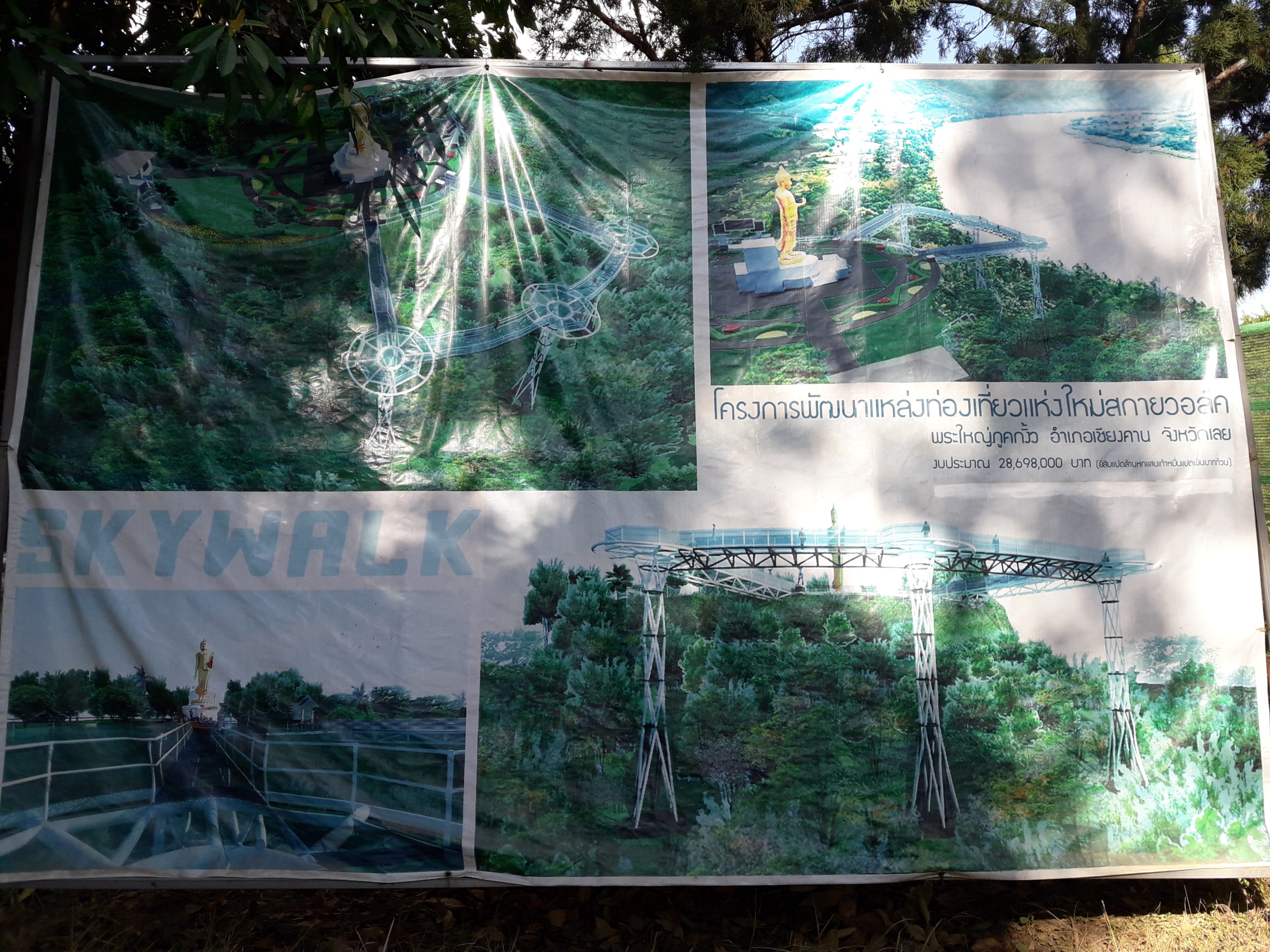 But while everything is under construction, Skywalk is not yet complete: 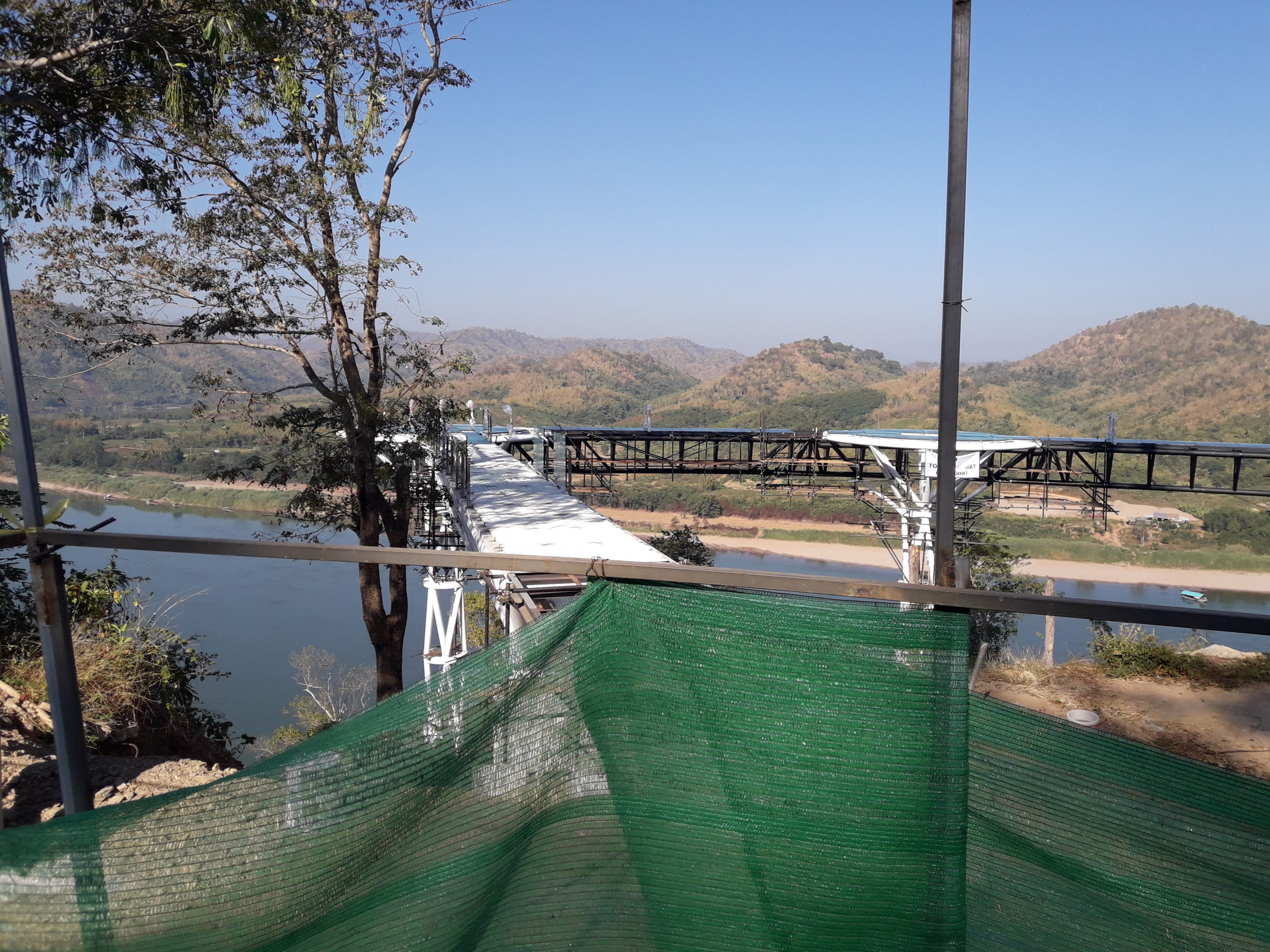 Statue. I think the view from Skywalk will be impressive, as if the statue is floating in the sky or something: 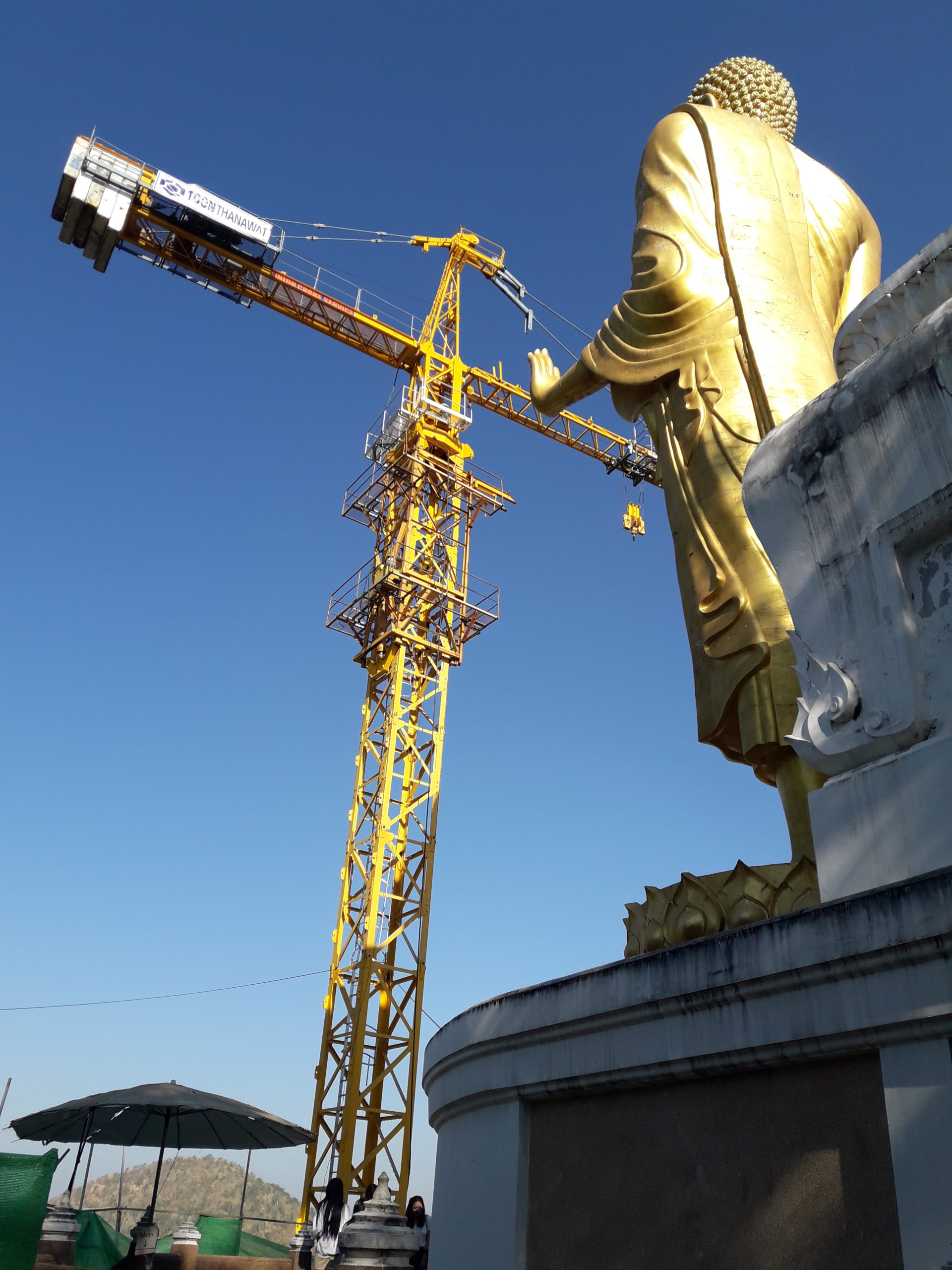 On the way back to the hotel, we found a beach on the banks of the river – we decided to return to it later, but for now it's time to check into the hotel. 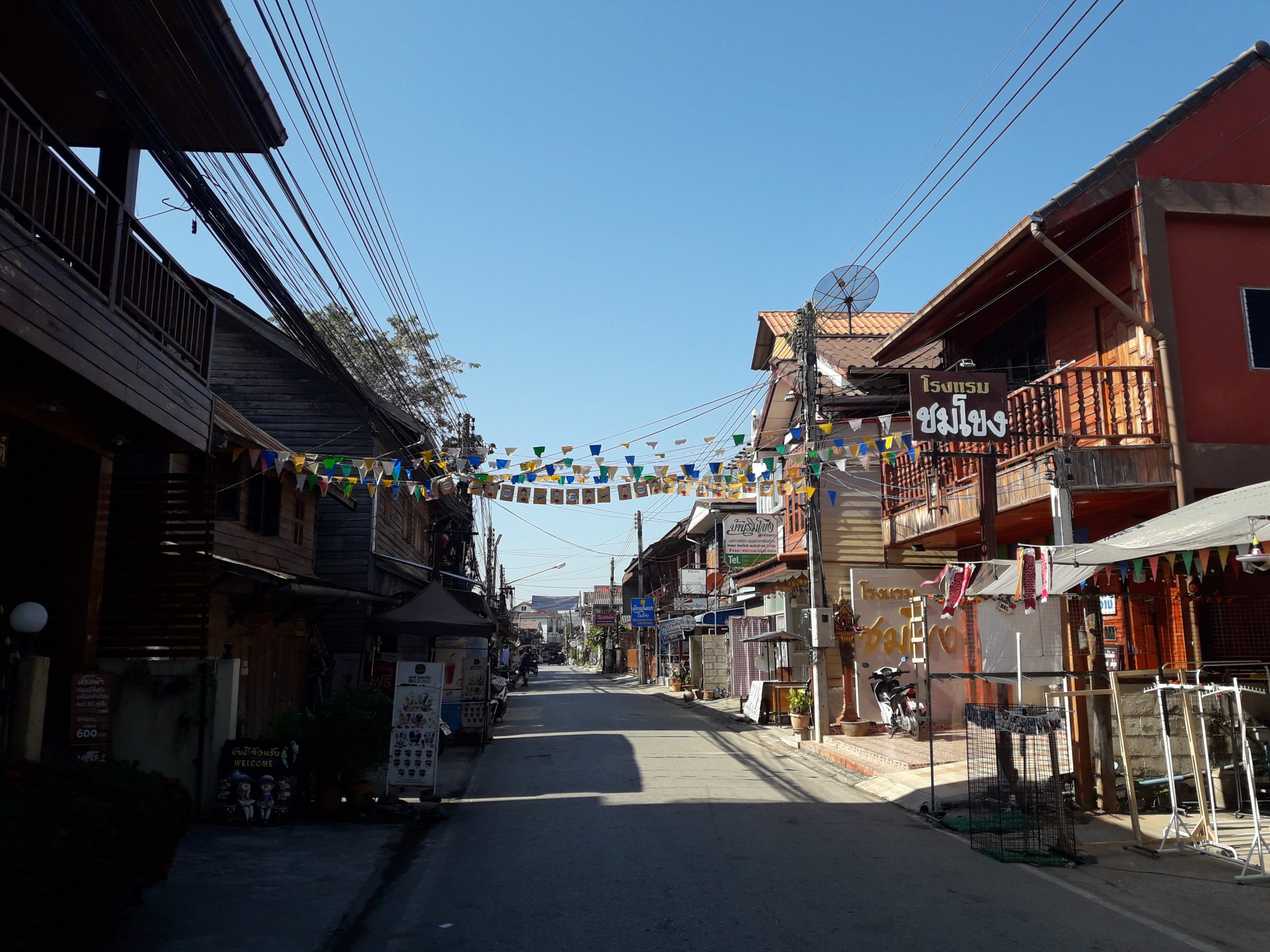 If the phrase Walking street will have special feelings in your soul, then relax – in Chiang Khan this is a pedestrian street in the historic center of the city, runs along the river. The main attraction is the food fair throughout the street, this fair takes place a couple of hours, about 17-19. Before and after this time, absolutely nothing happens on this street.

There are many homestays/hotels on this street with an average cost of 500 baht per night. 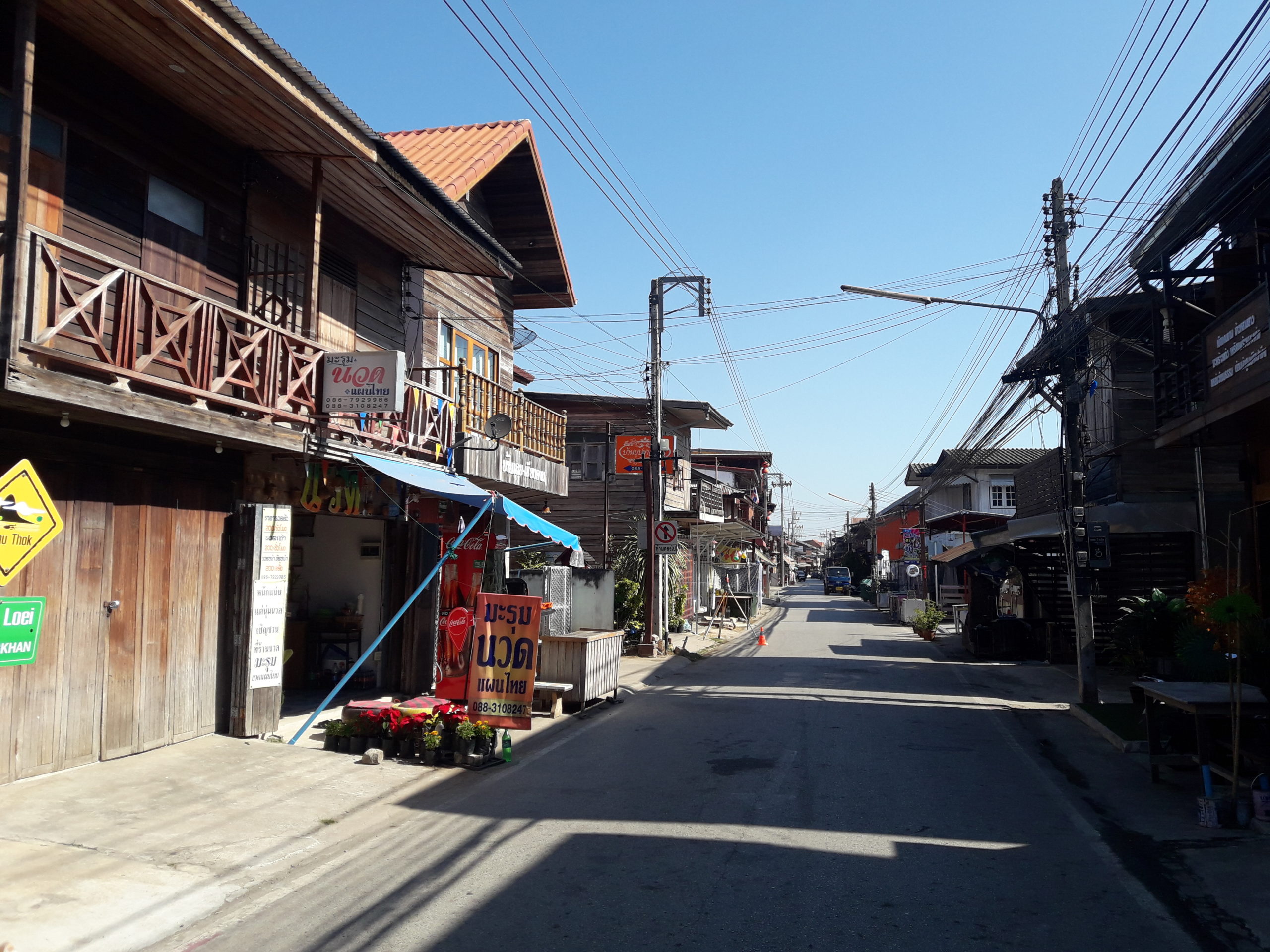 In the evening, we walked around the Walking street fair, bought food and sat on the steps descending to the river. Music was playing nearby, a warm evening, a pleasant view – Chiang Khan, first of all, this is a place where you can relax. 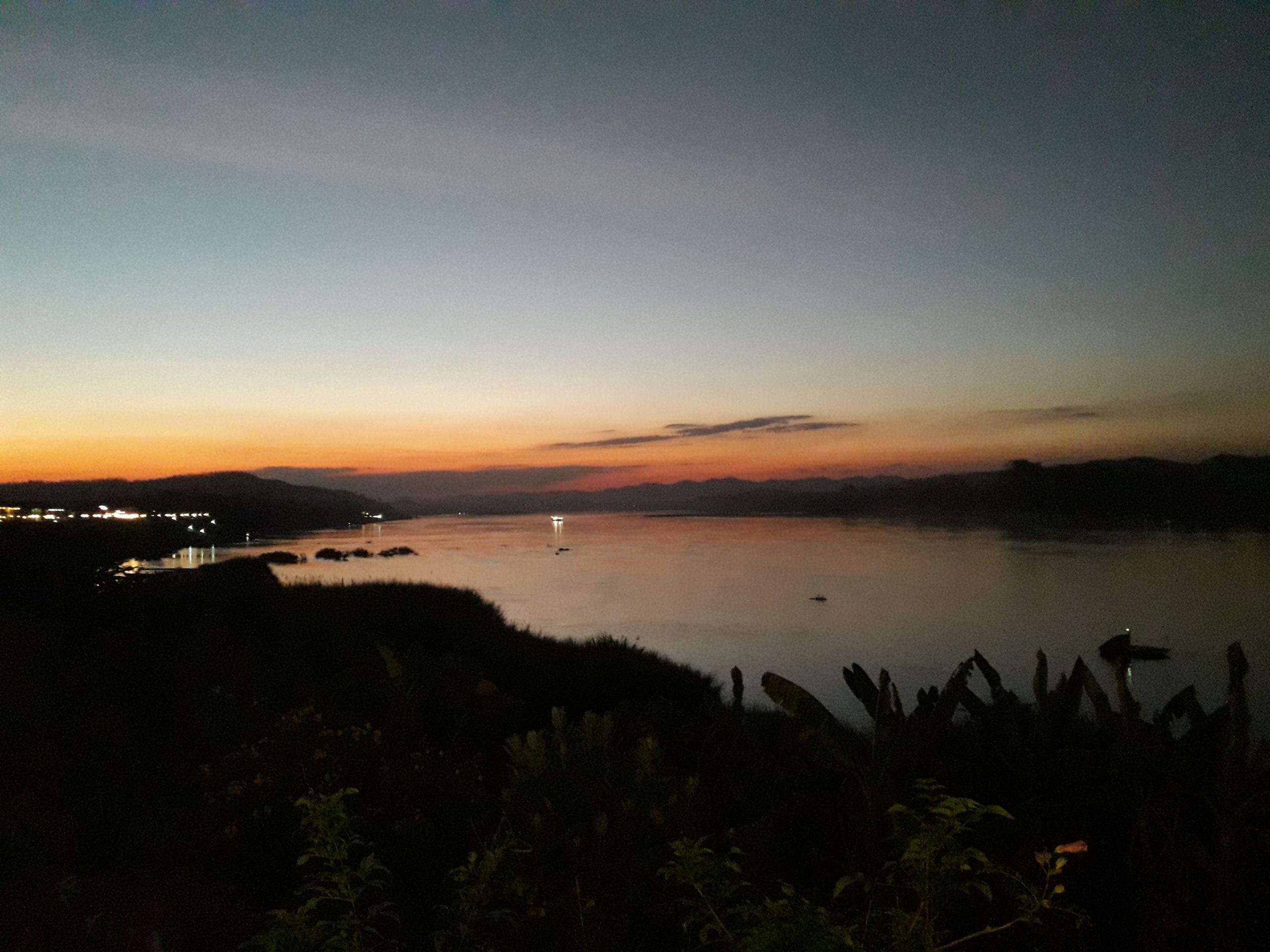 Love for bicycles in Chiang Khan

Chiang Khan has bike paths and bikes are popular here. You can ride bikes along the river and Walking street). It was possible to rent a bike for free in our homestay, so although we had a bike, we decided to ride a little on the morning of the second day. Outside the city along the river there is a blue bike path. But if you don’t have a love for bicycles, then you can get to the same places where you can ride a bicycle by motorcycle. I asked my girlfriend, with whom I traveled this time, “what are my impressions of the bike ride?” (it was her idea), she replied ‘ass hurts’. In general, I had similar impressions from a bike ride. 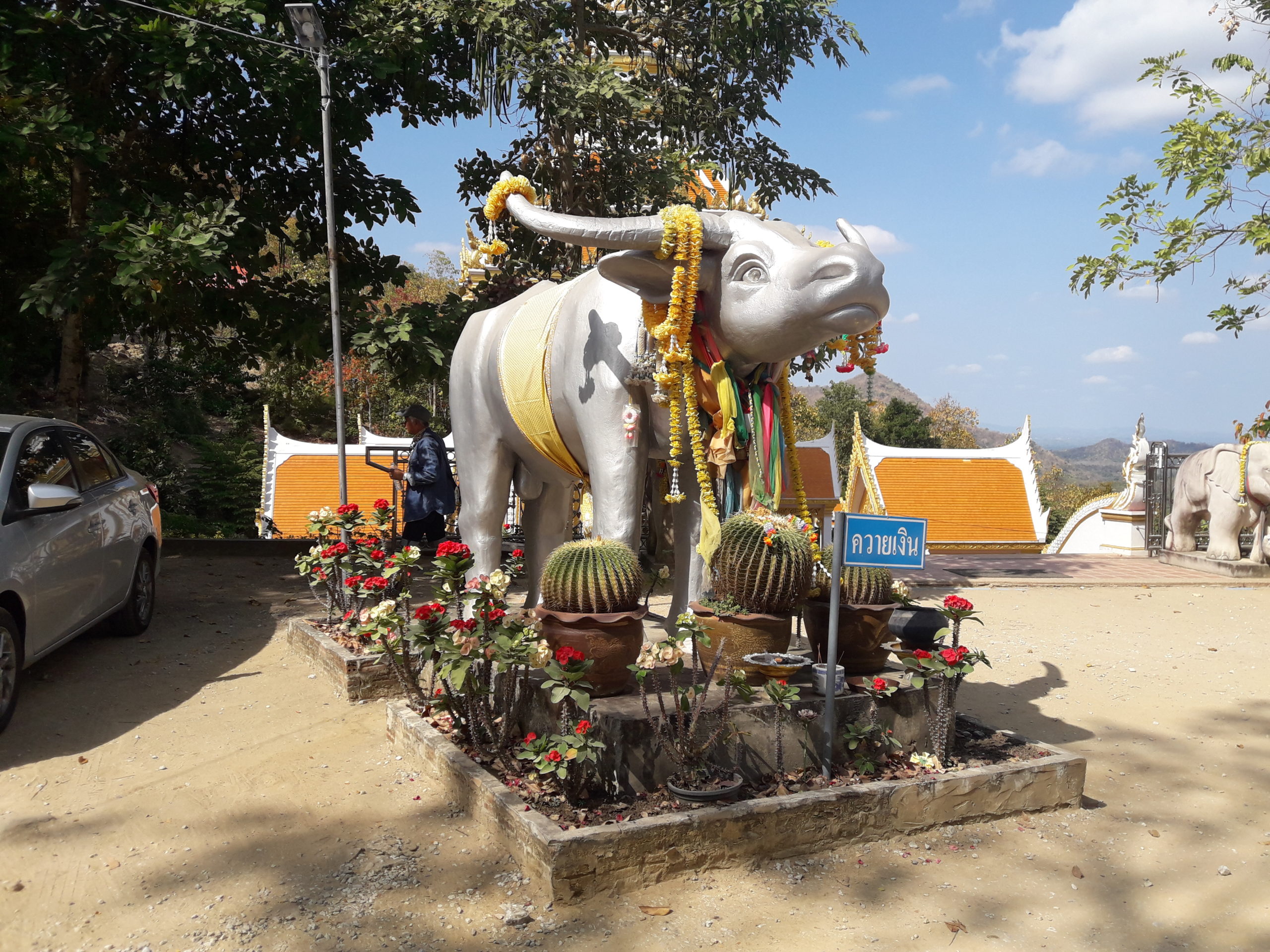 Khwai Ngoen is translated as a silver buffalo. That is, this is the Temple of the Silver Buffalo.

The temple is located on a mountain with a beautiful view of the valley and the village. 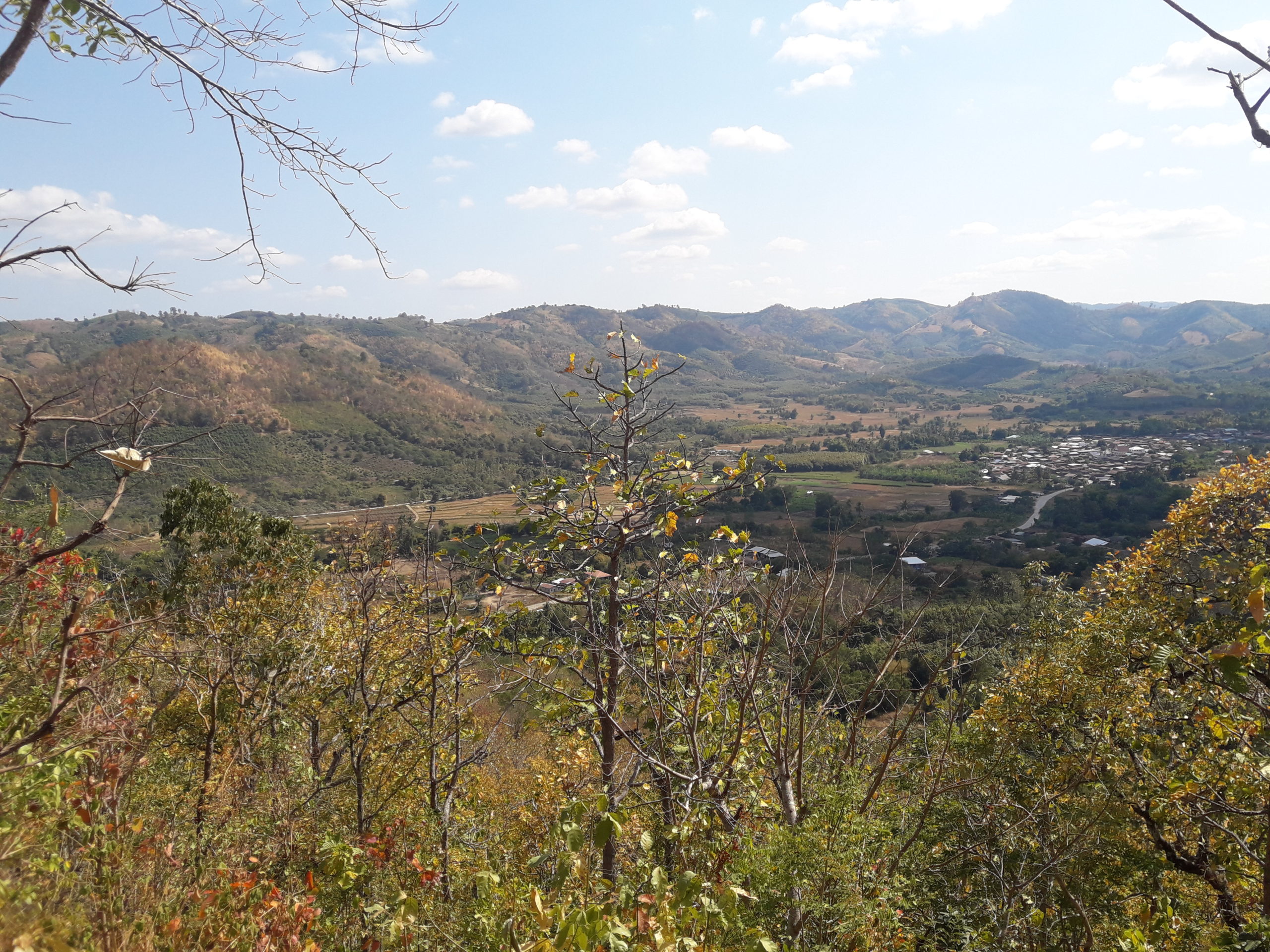 In northern Thailand, the winter months resemble the very beginning of autumn in Western countries. 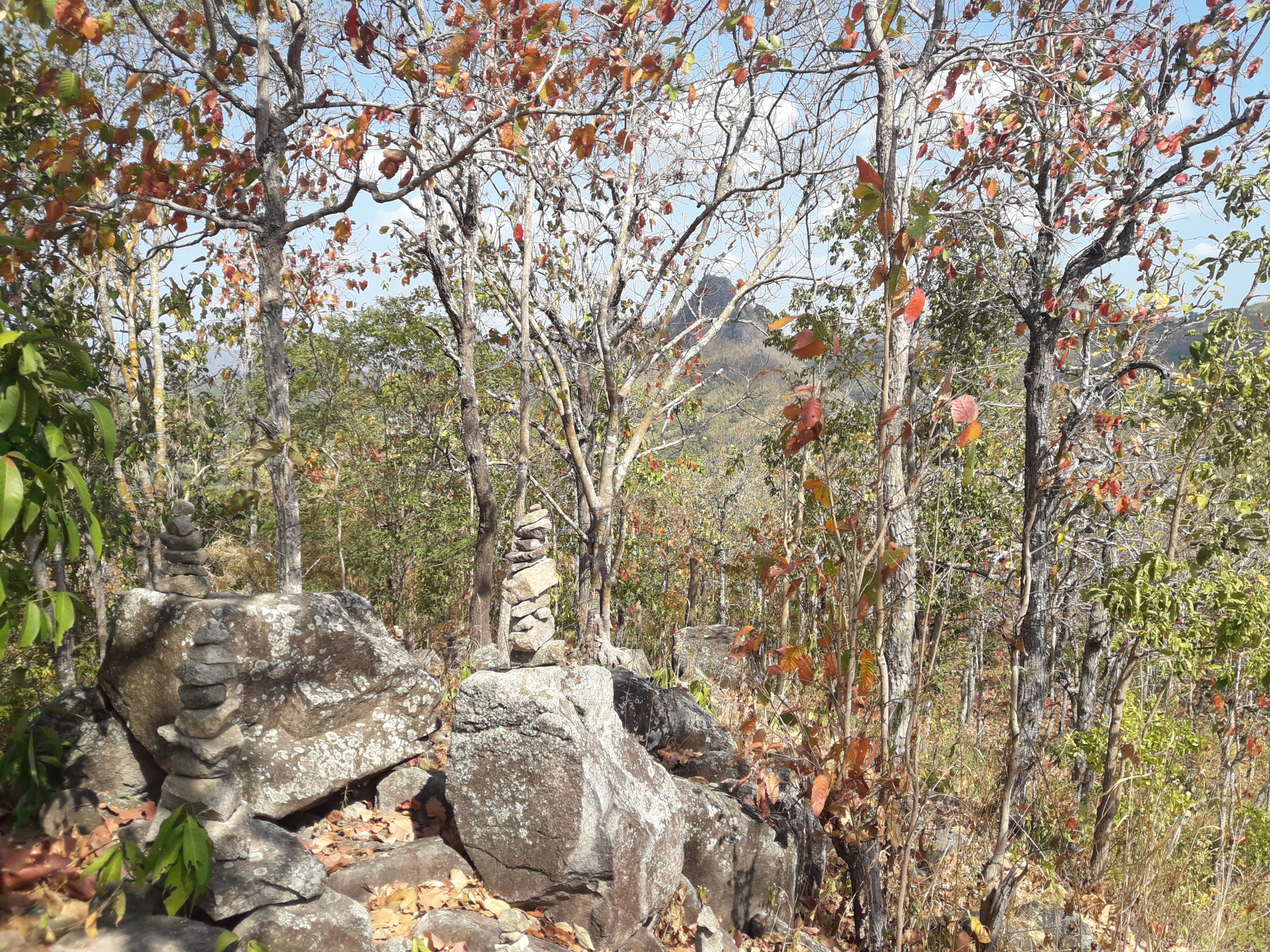 Near the temple there is an aviary with rabbits that you can feed – food is sold right there. Outside the enclosure, a guinea pig lives under a stone, which begs for food before rabbits. 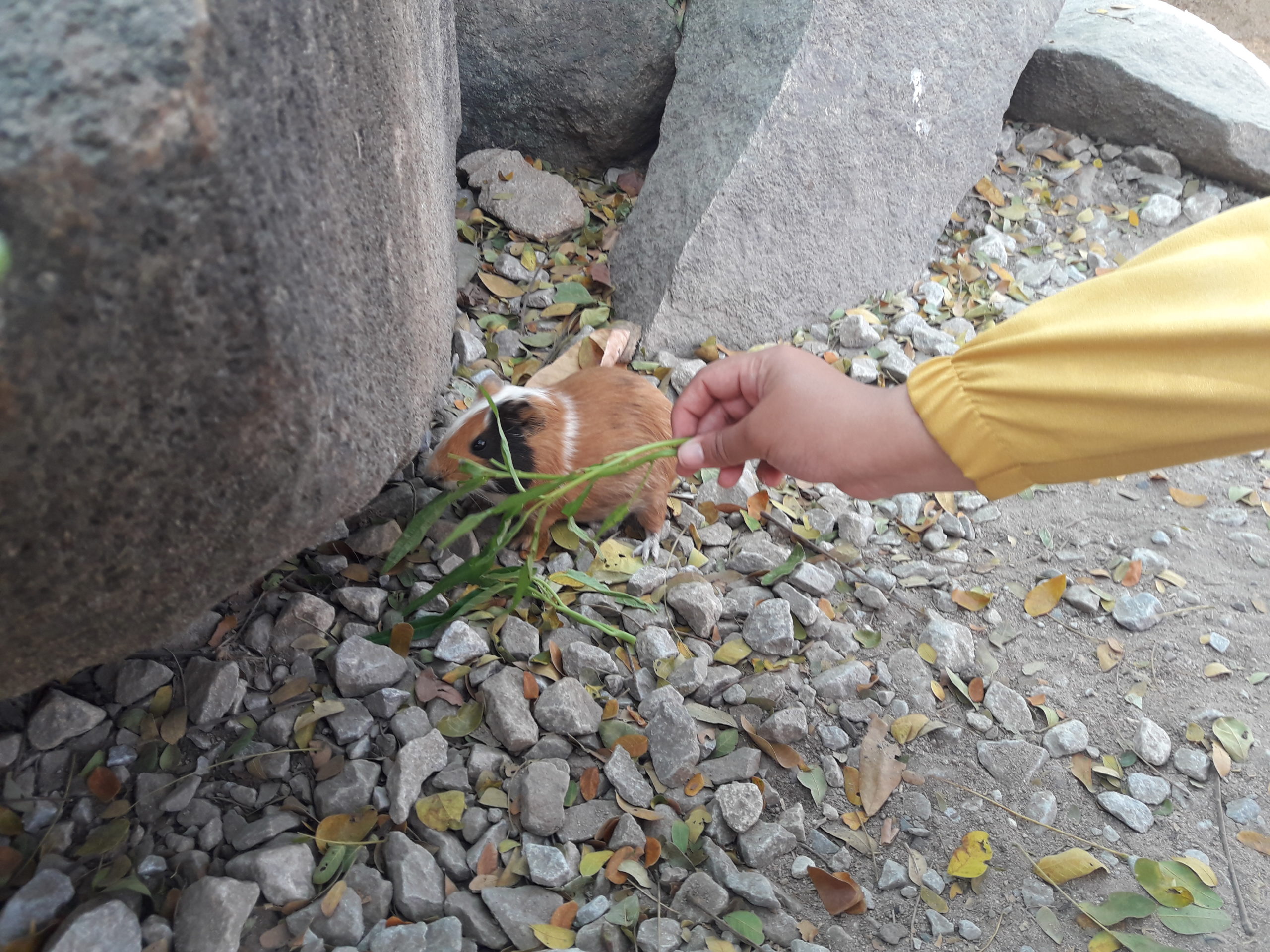 There are many rabbits from very young to old, there are hens and a hefty boar. 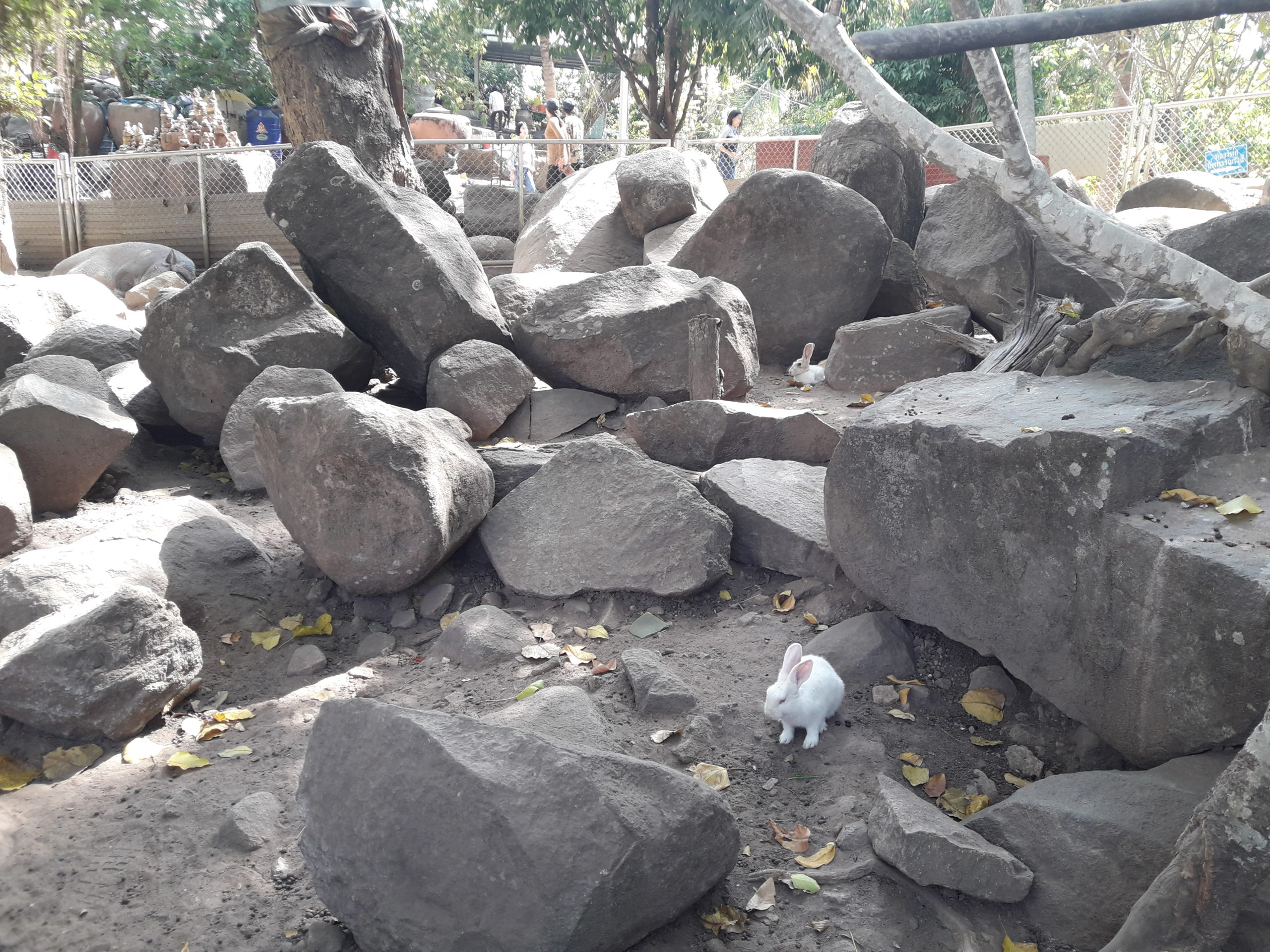 There is also an enclosure with turtles, but the hares made their way there. 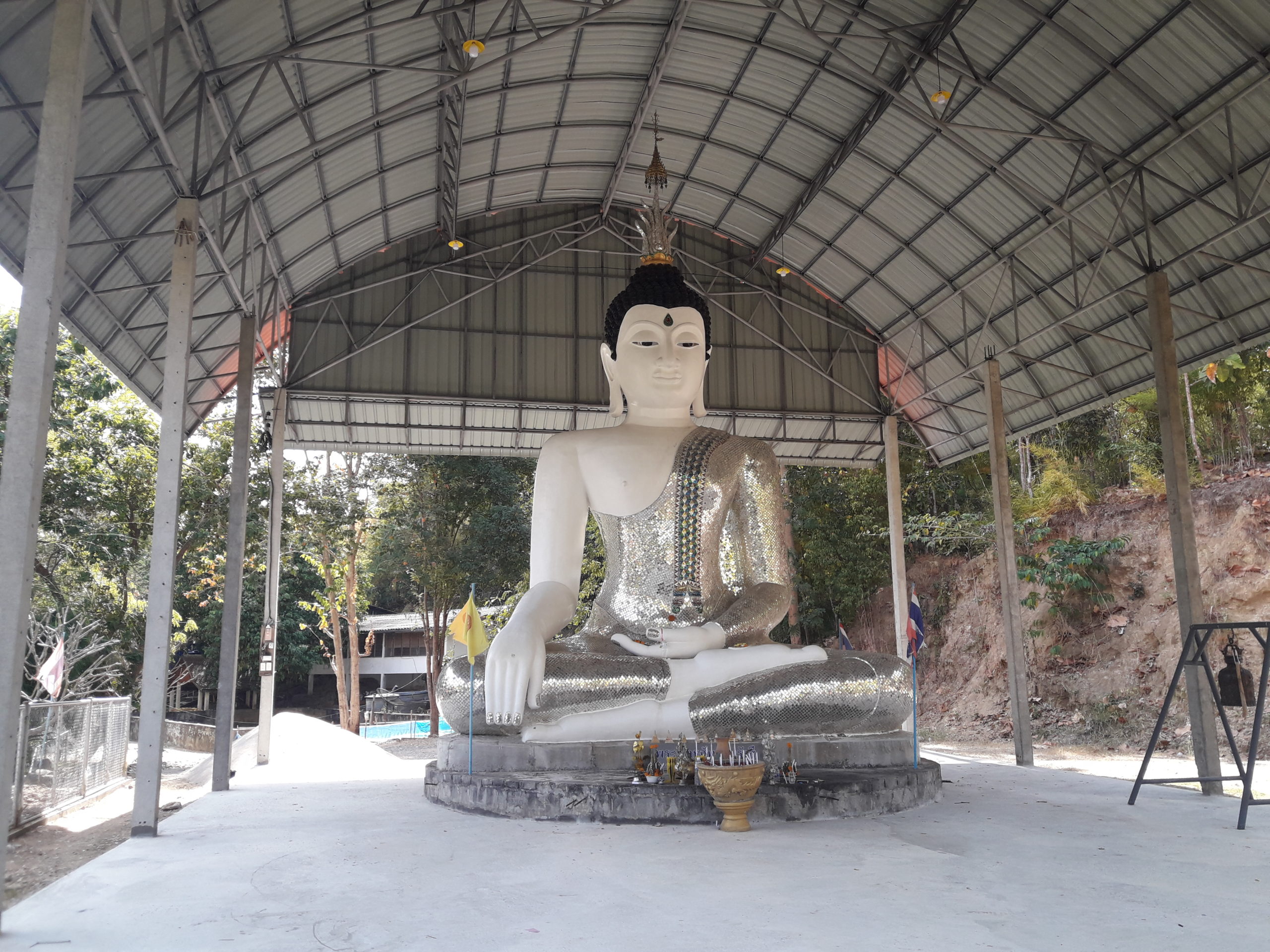 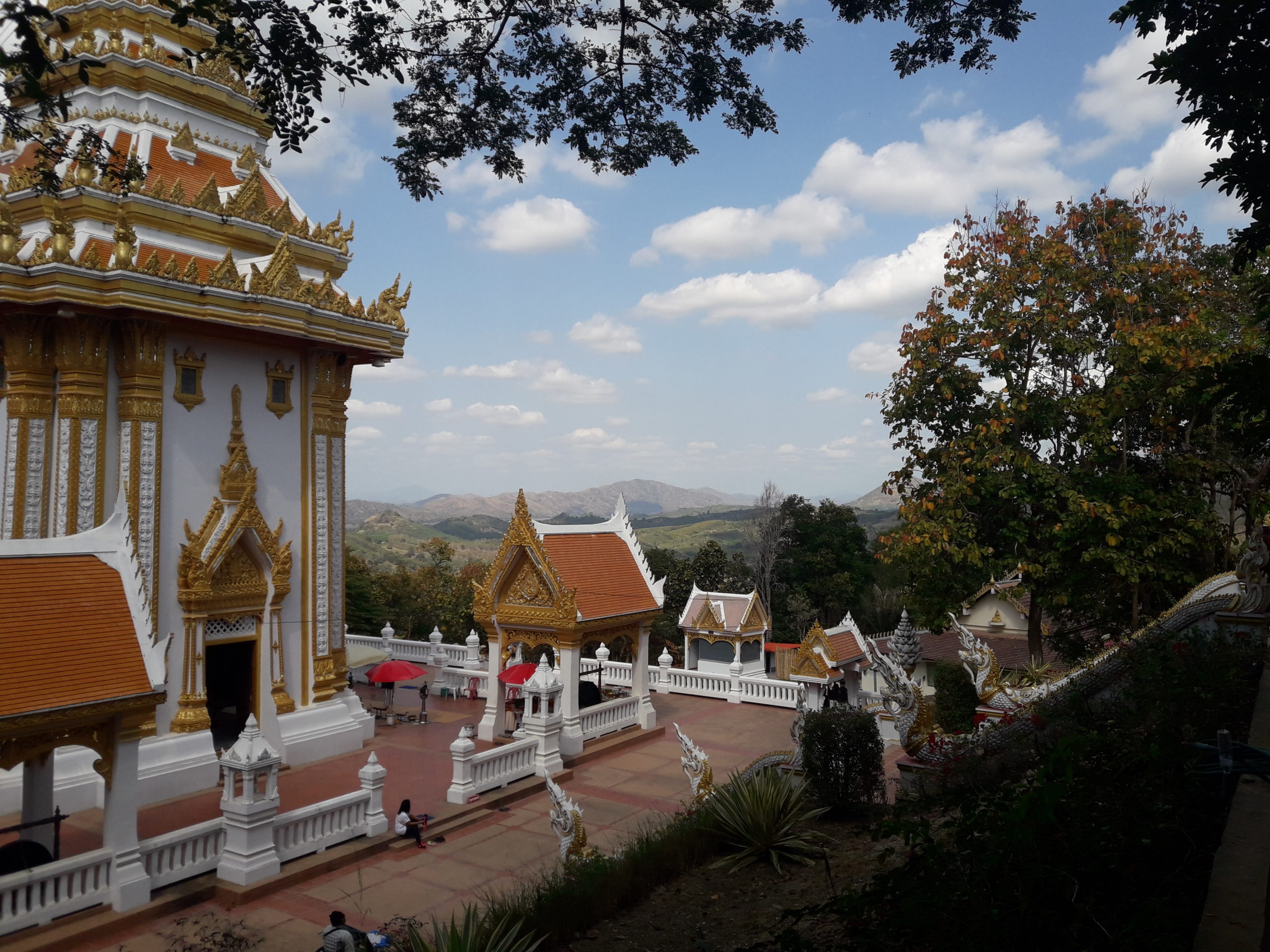 We did not enter the temple itself, as we were going to a couple more places. 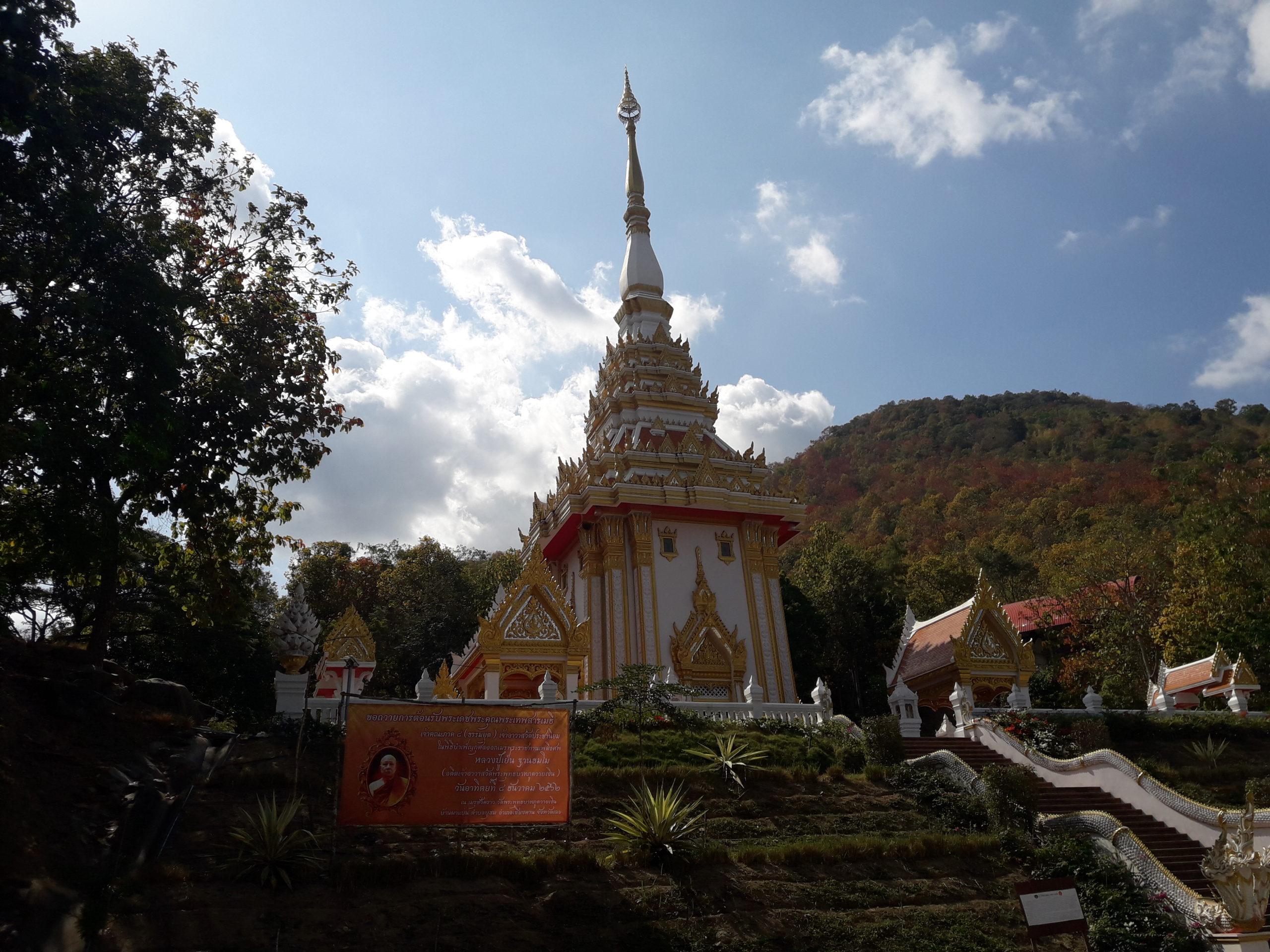 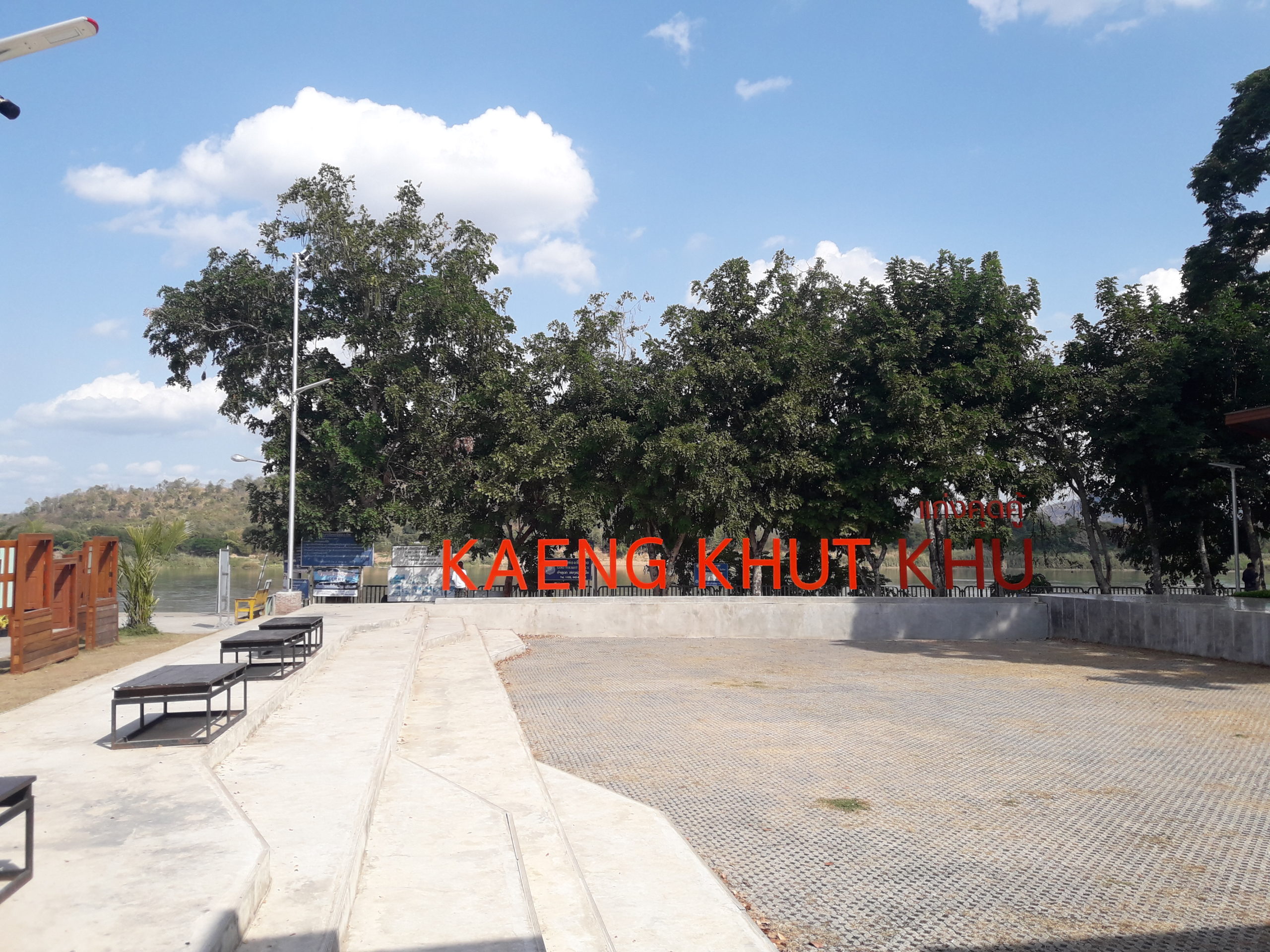 On the way back from the Silver Buffalo Temple, we stopped at Kaeng Khut Khu.

Kaeng Khut Khu is a beautiful natural place where the river makes a turn, a small museum and a place from where you can go boating. 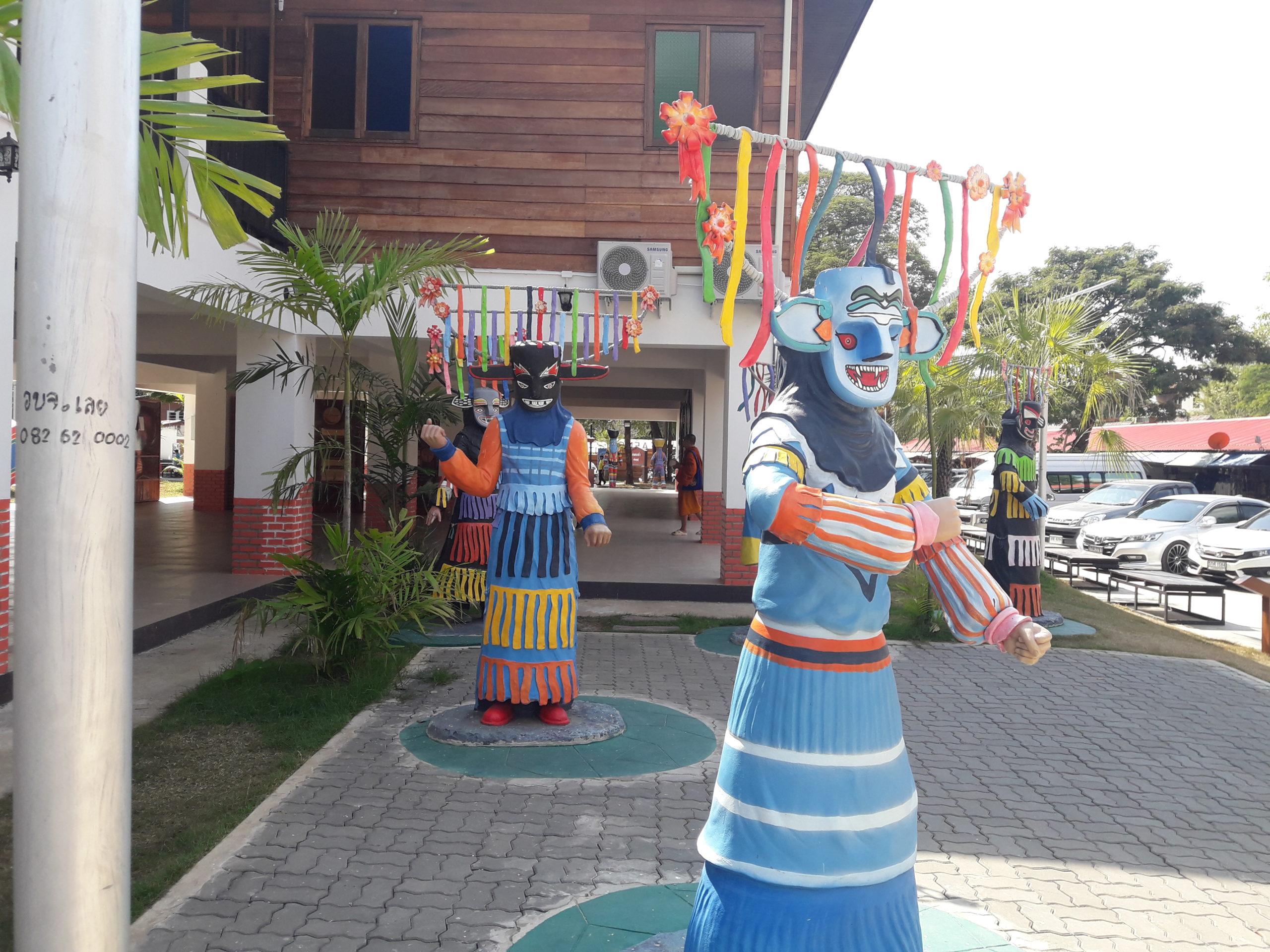 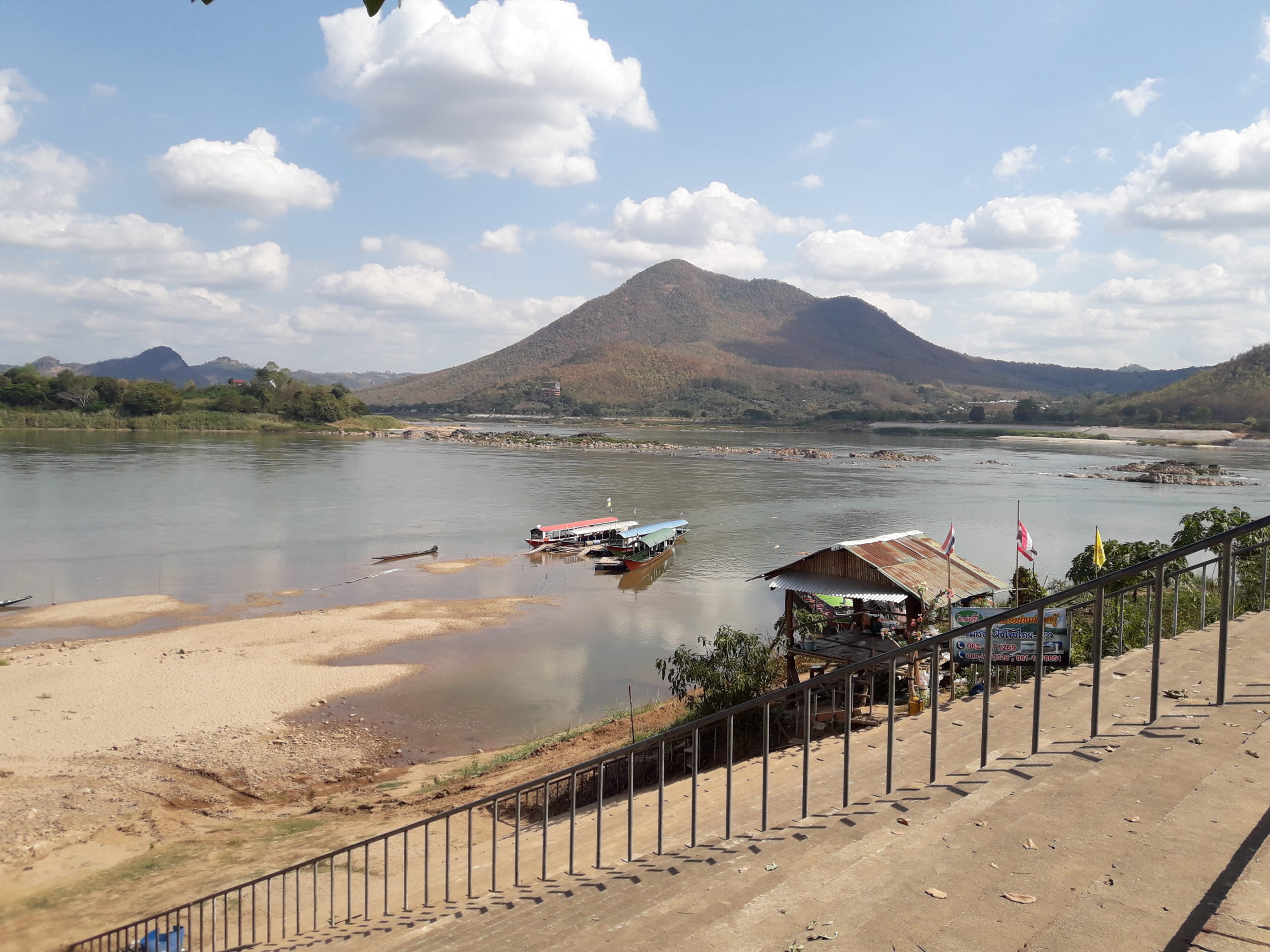 Monument to a crossbow warrior. 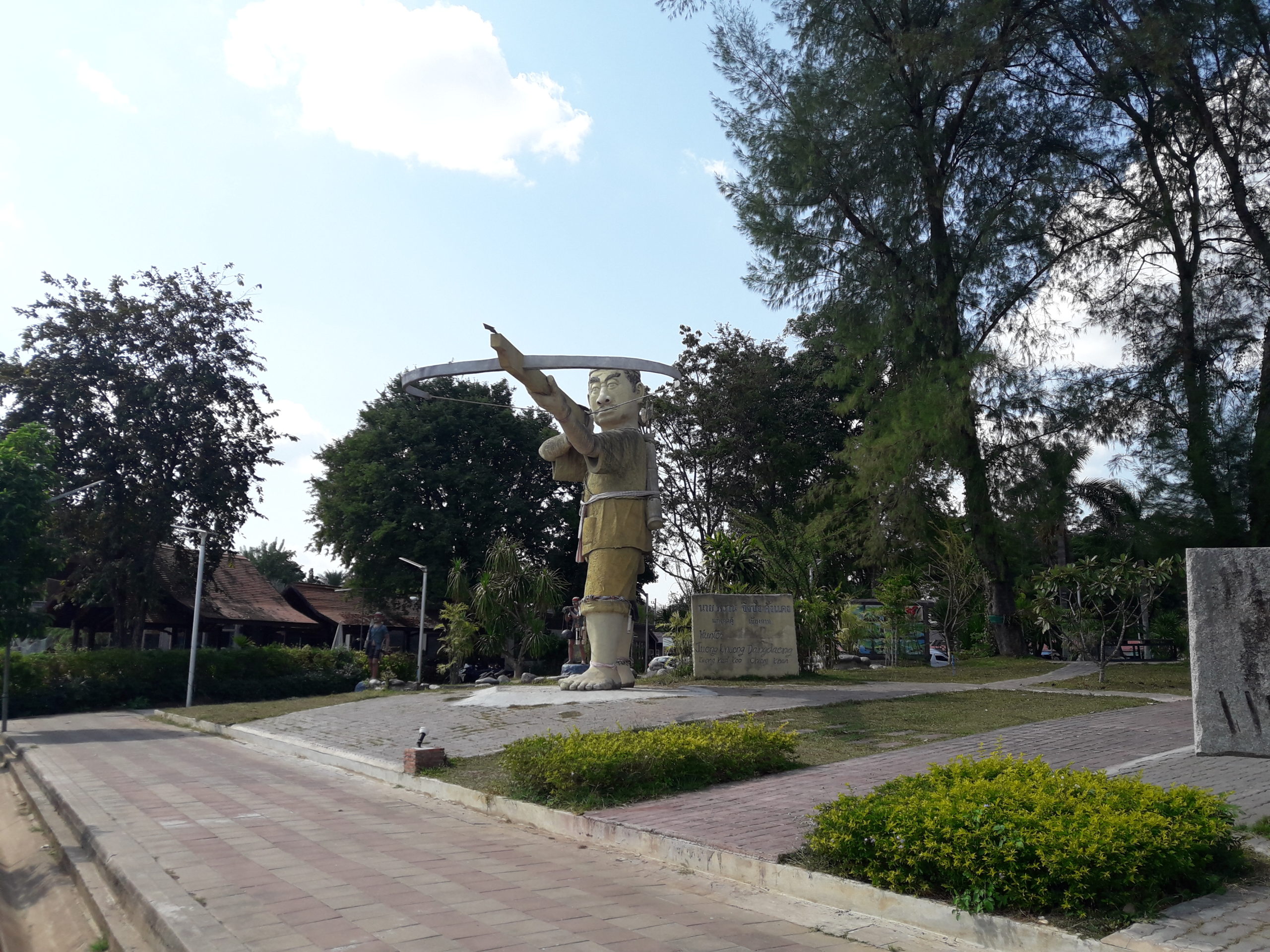 The arbalester looks at the opposite side of the river – there is Laos and there were wars with this country. 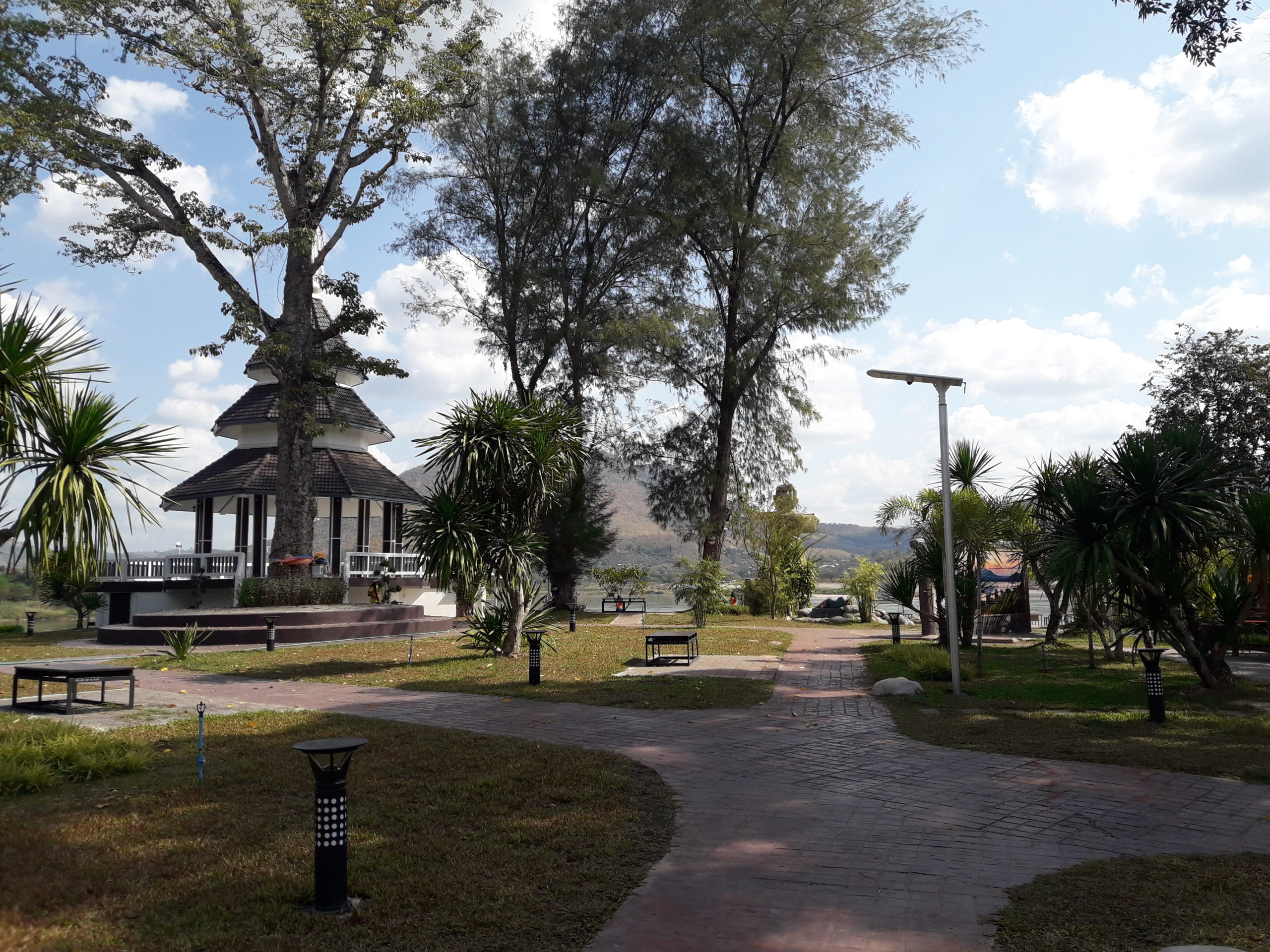 A small museum dedicated to the history of these places. 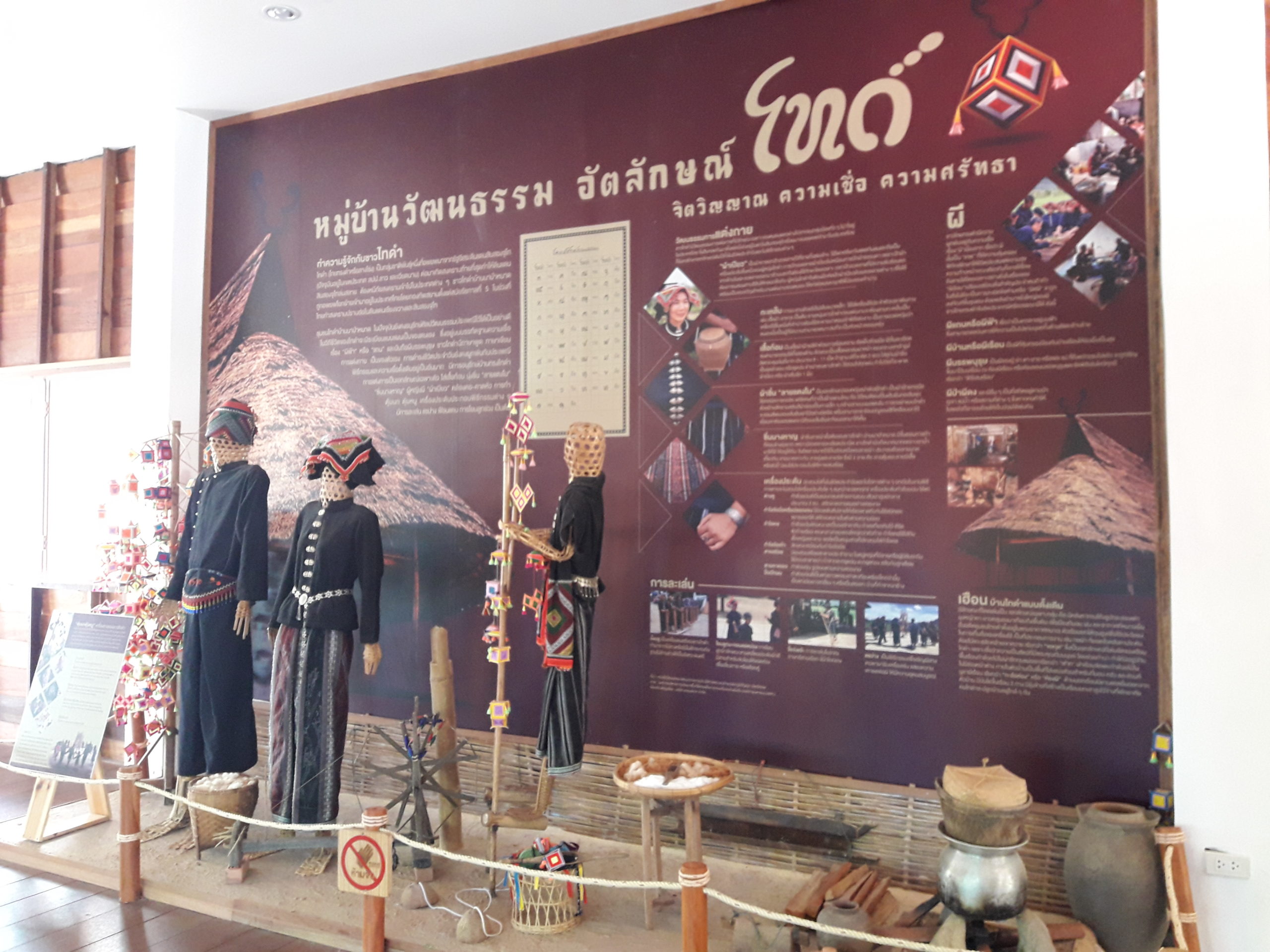 Nang Khoi Beach is the saddest place in Thailand… The bottom line is: there is no sea in Chiang Khan, but there is a river. The river is fast, cold and its banks are covered with stones and sharp shells. In one place, next to the production of sand, made a sandy beach. On this beach, sun loungers and indoor seating, restaurants with food. The only thing that is not there is visitors.

It is very pleasant to play sand on the shore (although it is not yellow, but dark). But swimming there is not very nice the river flow is so strong that even if you go to your knees in the water, then it becomes very difficult to move and just stand. And the bottom of the river is covered with stones and shells. In general, if I had not come from Hua Hin, where there are beautiful beaches and a beautiful warm sea, I would have been glad of such an opportunity to relax on the river bank, but since at that time I had already lived in Hua Hin for a year, this beach did not impress me.

I liked this trip. There are quite a lot of tourists in the city center, but most of them are Thais who came from other places of Thailand. There are few foreigners. If you want a very quiet and measured life, then this is exactly the place where nothing happens. For lovers of big cities and shopping centers here will be boring.

This place, in my opinion, suffers greatly from a lack of tourists. In the center, everything is not so bad, but at a distance from the center everything is different: in the temples there are some visitors, nobody at the river beach at all, in buffets (where you pay a fixed amount and eat as much as you want) are also rare guests.

In these places, Asian overpopulation is not felt, and even on the roads there is little transport.

All in all, this is another pleasant place with its own characteristics – I am glad that I made this short trip.