On Arch Linux, when trying to use the phpMyAdmin 5.3 pre-release, I encountered an error:

Checking in Debian showed that there is no such problem with phpMyAdmin 5.3.

The reason for the error is that sodium support is not enabled.

How to enable sodium on Arch Linux (Manjaro, BlackArch)

Find the line in it

and uncomment it to get:

Restart the web server for the changes to take effect:

This will enable sodium support and the error in phpMyAdmin 5.3 will disappear.

When updating the package cache with the pacman package manager, for example, when running the following command to update package information and update the system:

An error may occur:

To fix the error, run the following command:

And then run the system update command again:

This time the error should be gone. 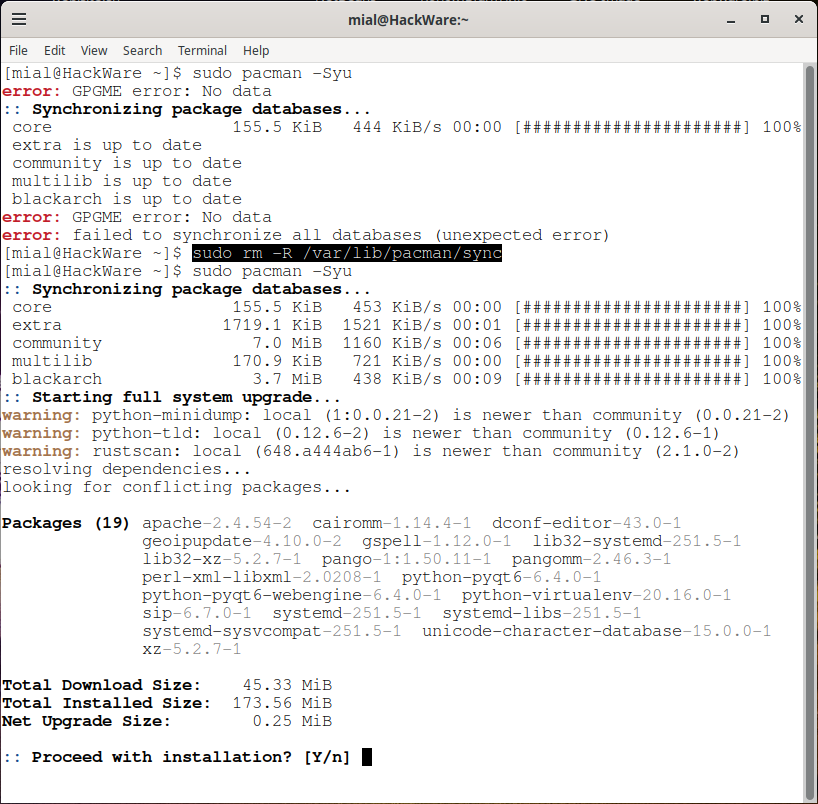 Cause “error: GPGME error: No data. error: failed to synchronize all databases (unexpected error)” may be the following situation: you have exhausted the limit of your Internet connection and instead of the requested data, your Internet provider shows its page with information about the need to replenish the balance. As a result, incorrect data is sent in response to outgoing Internet connections, although the connection is successful from the point of view of the computer.

That is, pacman asks for information about the packages, but the ISP sends the data to show the Captive Portal. As a result of this, pacman has the indicated error. To fix it, you need to delete the cached data, which is done by the above command. 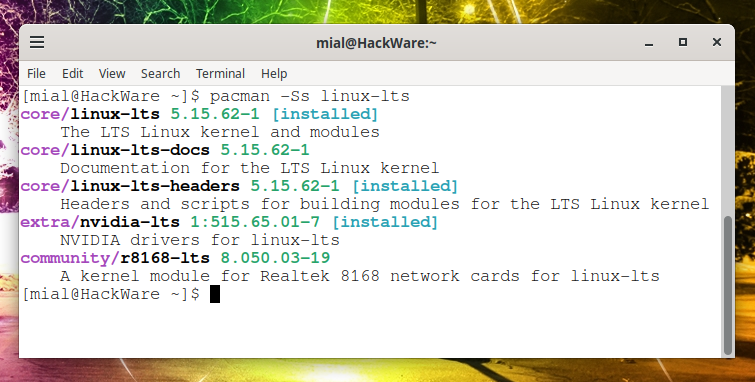 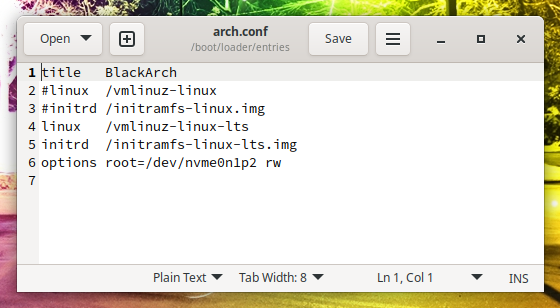 When upgrading mariadb to version 10.8.3, the following messages were shown:

They contain information about two events that require the action of a system administrator or user.

The second one is more important, it says that to update the data, you need to run the specified commands.

First, restart the DBMS service and check its status:

On the one hand, the service is up and running. However, there are a few error messages as well as a few warnings. Most important messages:

Action must be taken to fix errors.

To do this, run a database update:

You will need to enter the password of the DBMS root user and wait for the command to complete. 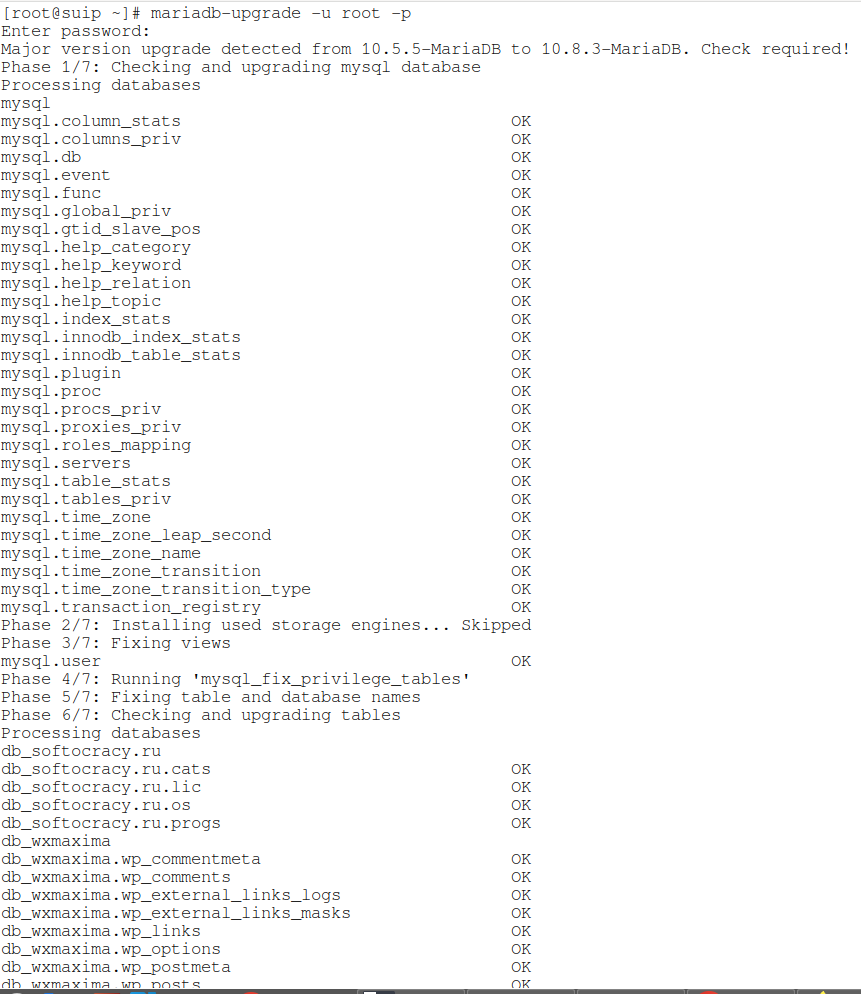 Then restart the service again and check its status:

As you can see, there are no errors.

This is not an error, but a warning. The bottom line is that the permission on the /usr/lib/mysql/plugin/auth_pam_tool_dir/ directory differs between the actual value in the file system and the one specified in the installation package.

The most likely reasons for this are:

To bring the value of permissions to those recommended in the installation package, start by checking the current value:

Then run the chmod command with the desired permissions:

As you can see in the following screenshot, the permissions to the specified directory have been changed:

When updating or installing packages in Arch Linux, Manjaro and their derivatives, you may encounter the “error: failed to commit transaction (invalid or corrupted package). Errors occurred, no packages were upgraded.” issue.

In this case, the error occurs when trying to update the libinih package, but it can occur for other packages as well.

First, try delete the package, as recommended, and run the update again to download the installation package file. This will resolve the issue if the error is caused by a corrupted package, such as a network outage.

This should fix the PGP signature verification issue.

This error and the problem with incorrect PGP signature can occur on systems that are rarely updated (updated with long breaks). The error lies in the fact that packages with “invalid” PGP signatures are signed with keys that are contained in the updated version of the archlinux-keyring package. Therefore, by starting with updating archlinux-keyring you get new versions of the keys, which then successfully verify the PGP signatures of the package files.

In Arch Linux, the linux-firmware package, which contains the firmware files, got important changes. In addition to the usual file updates and adding support for new devices, this package has a requirement for a minimum kernel version, and the package itself is divided into several packages.

Recall that device firmware are files that are necessary for the normal operation of the hardware in addition to kernel modules (drivers).

The linux-firmware package now implements kernel firmware compression and also requires Linux kernel version 5.3 or later with support for booting from compressed xz firmware. The CONFIG_FW_LOADER_COMPRESS kernel option must be enabled. All official Arch Linux kernels have supported this for a long time.

The following packages are now in the official Arch Linux repository:

When installing a package on Arch Linux or a distro derived from it, for example, by running the following command:

an error may occur stating that dependencies could not be resolved. The name of this dependency can contain the number “32” or the string “lib32”, that is, it is a 32-bit package, for example:

To fix this error, multilib must be enabled.

The multilib repository is the official repository that allows the user to run and build 32-bit applications on 64-bit Arch Linux.

Find and uncomment the lines in it (make sure to uncomment both lines, otherwise the changes will not take effect): 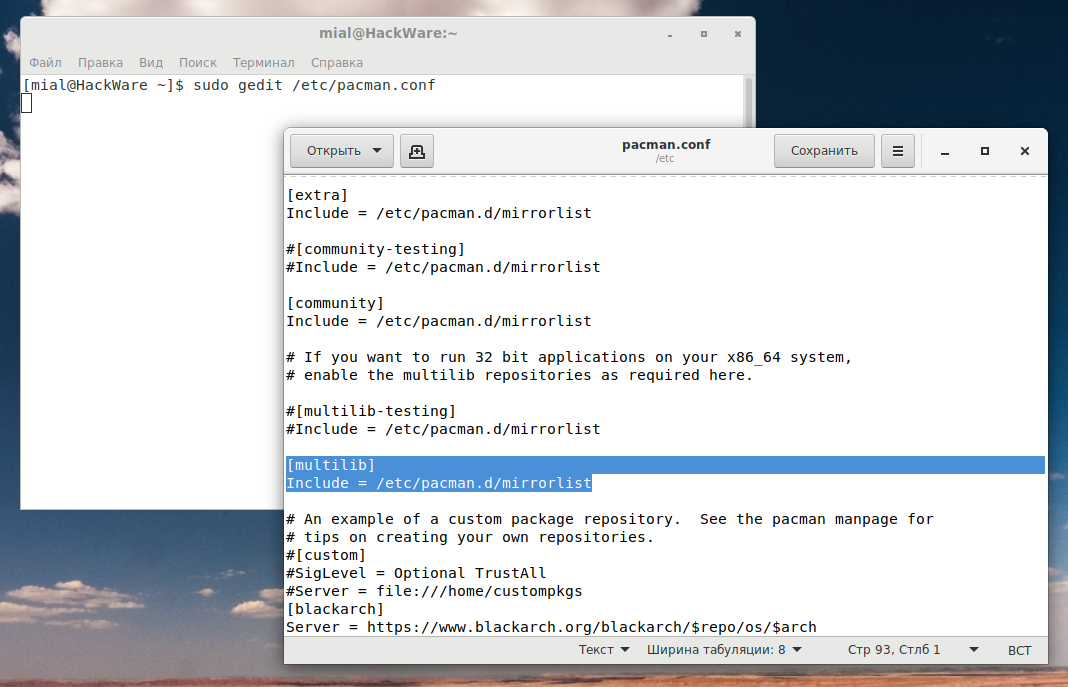 And re-run the package installer – this time all dependencies should be resolved.

How to install PowerShell on Arch Linux, Manjaro, BlackArch

PowerShell is a cross-platform automation and configuration tool/platform. PowerShell has a large number of system administration-oriented commands. But at the same time, PowerShell is a full-fledged programming language that allows you to write functional programs (scripts).

Note that PowerShell 5 is currently preinstalled on Windows by default, but this manual shows the installation of the latest version of PowerShell 7. On Windows, you can also install PowerShell 7.

Due to the differences between Windows and Linux operating systems, not all PowerShell functions work on Linux.

It is recommended to install the pikaur utility according to the article “Automatic installation and update of AUR packages” and then just run the command:

If you don't want to install pikaur, then run the following command sequence to install PowerShell:

How to run PowerShell on Arch Linux, Manjaro, BlackArch

To start an interactive PowerShell session, run the command:

To list all PS commands on your computer, open PowerShell (pwsh command), and enter there: 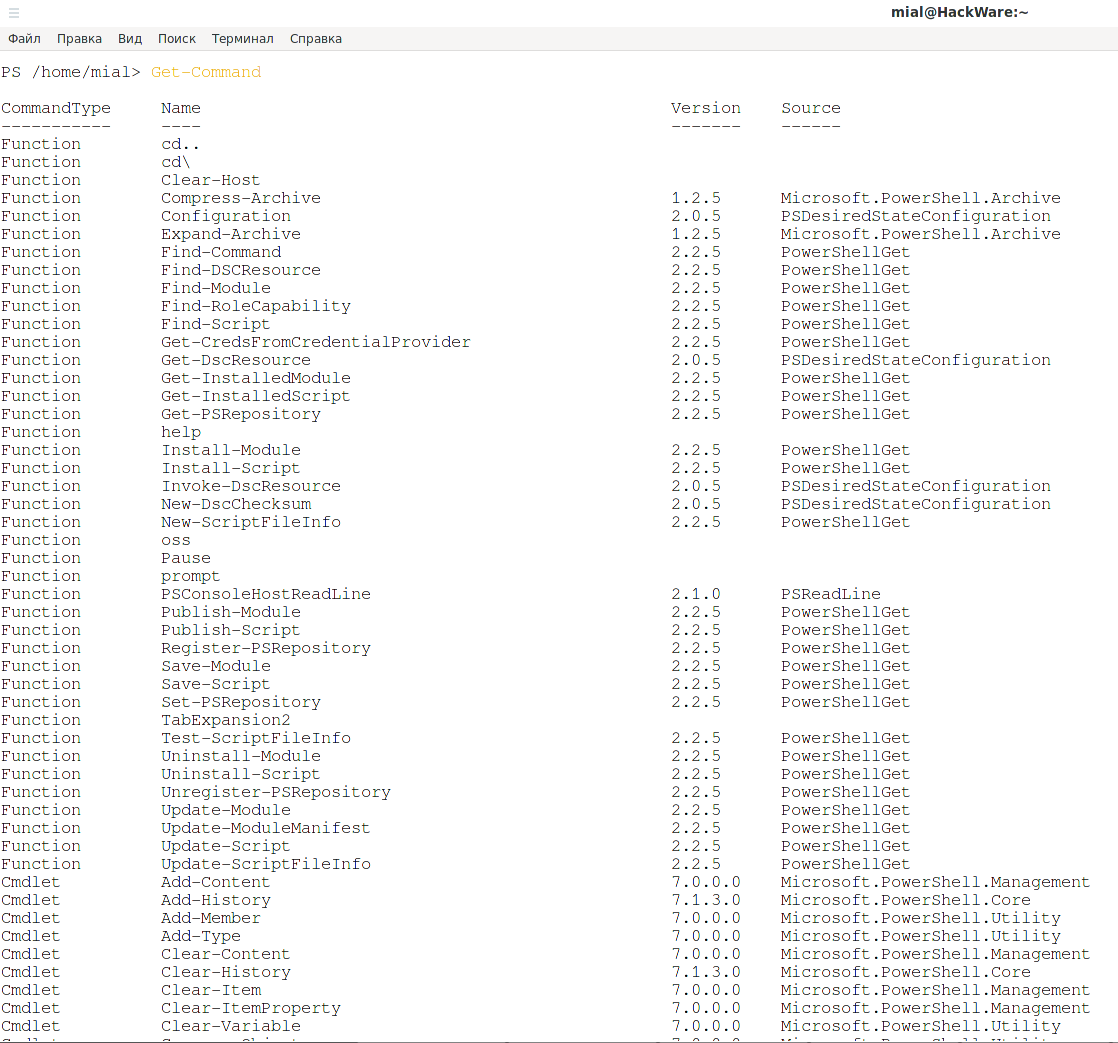 To display the contents of a folder (in this case the root of the file system), run: 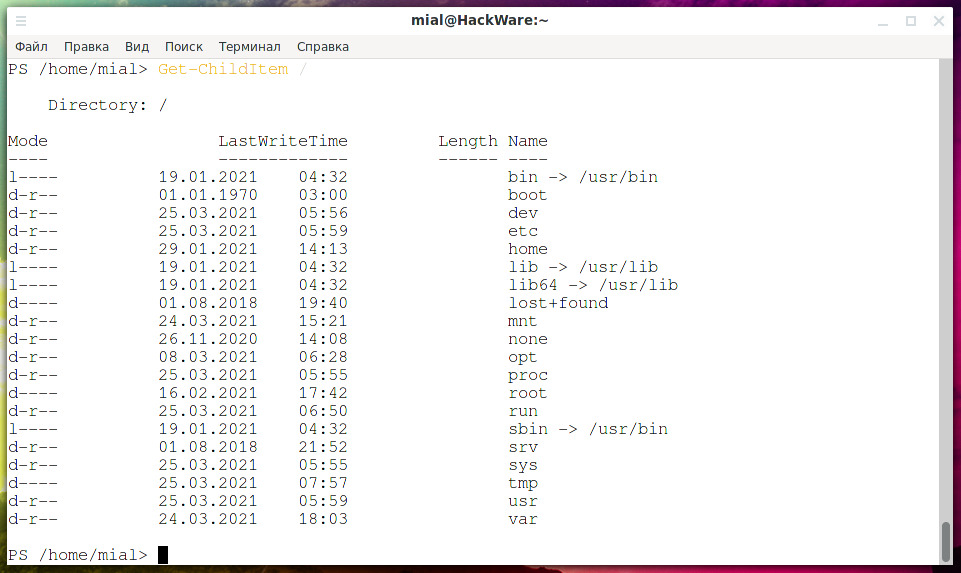 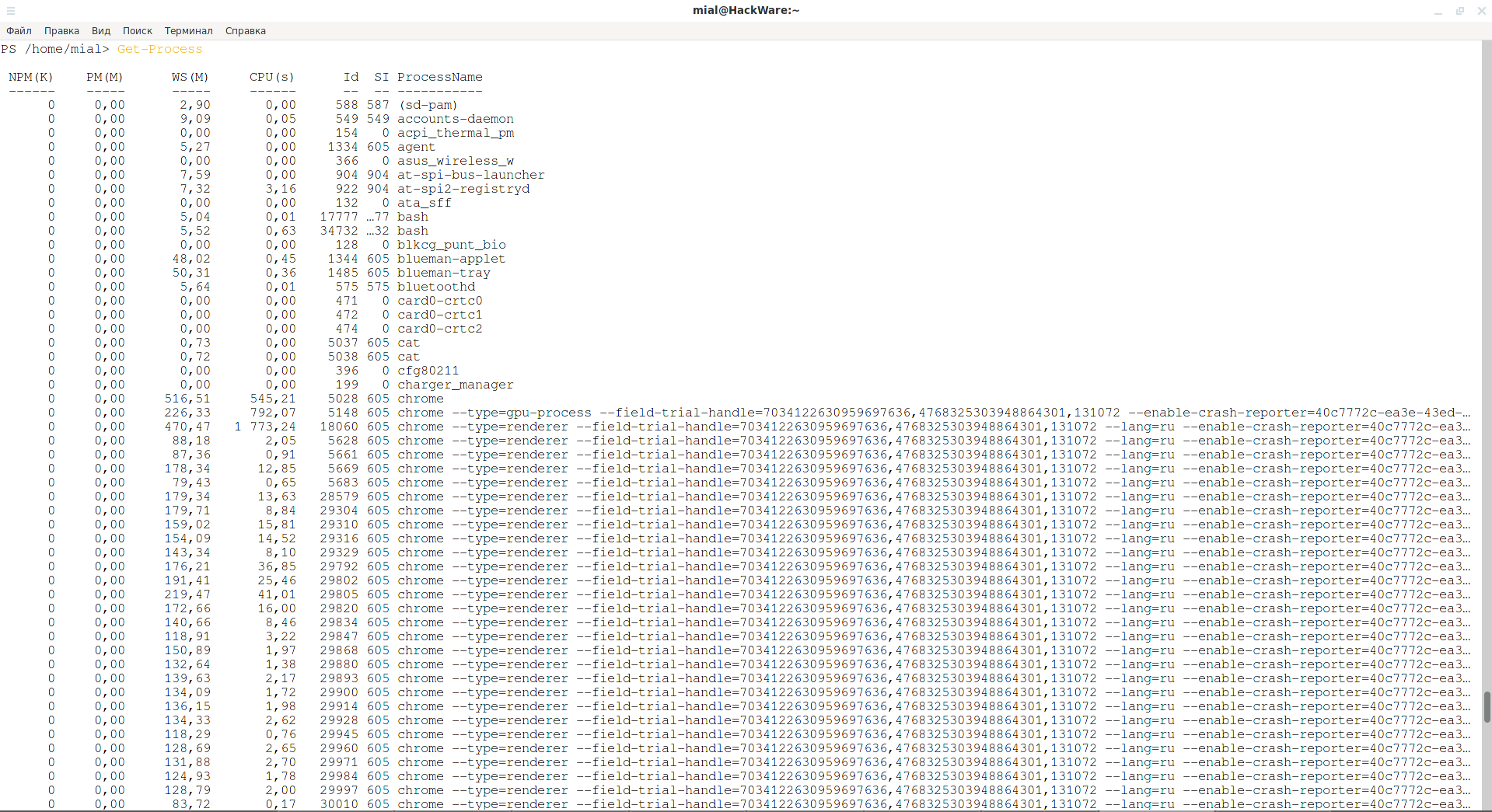